Coach Kiatisak Senamuang holds aloft a portrait of His Majsety the King as Thai players celebrate their AFF Suzuki Cup title at the Bukit Jalil stadium in Kuala Lumpur on Saturday. (AP Photo)

KUALA LUMPUR — Two second-half goals from Thailand were enough for the War Elephants to lift the AFF Suzuki Cup on Saturday for the first time since 2002. 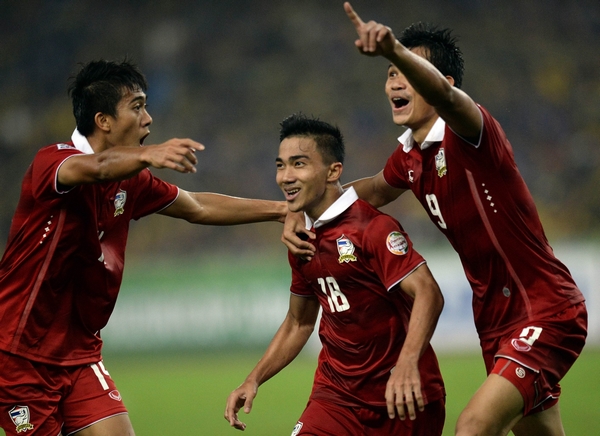 Malaysia won the second-leg match 3-2 but Thailand prevailed 4-3 on aggregate by virtue of their 2-0 home victory on Wednesday. 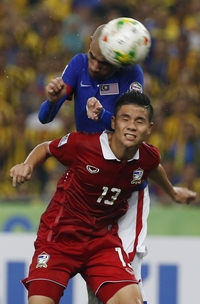 The Thai side was on the verge of letting the Asean championship slip through their hands when they went three goals down.

The Malaysians took an early lead with a spot kick from Safiq Rahim eight minutes into the match. Most neutral observers believed Malaysia's Norshahrul Talaha went down easily in the box to earn the penalty but Thailand didn't press the issue.

But Thailand keeper Kawin Thamsatchanan's hesitation two minutes into injury time cost the visitors another goal from a header by Indra Putra Mahayuddin. The second goal was only the second shot of the Tigers in the first half.

A brilliant, curling free kick by Safiq from outside the box after a foul made it 3-0 after 58 minutes and put the hosts on course to win the cup in front of more than 90,000 delirious fans at the Bukit Jalil National Stadium.

But Charyl Chappuis cut the lead to 3-1 in the 82nd minute. The Swiss-born striker pounced when Malaysian keeper Farizal Marlias palmed a free-kick into his path and he buried the rebound.

One away goal was all the visitors needed to lift the trophy, but Chanathip "Messi Jay" Songkrasin delivered a wicked left-footed volley five minutes later to put the game out of reach for the Tigers.

"We played a beautiful game, a fantasic game," Thailand coach Kiatisak Senamuang said after the match.

Chanathip said the Thai team didn't panic after seeing three goals from Malaysia and continued to play at their own pace.>

Defeat was cruel for Malaysia, who appeared to have pulled off another great escape after they overturned a 2-1 first-leg deficit in the semi-final against Vietnam by winning 4-2 in Hanoi.