Leaders of the six Mekong basin countries have endorsed a one-trillion baht investment programme to finance new transport projects across the region. 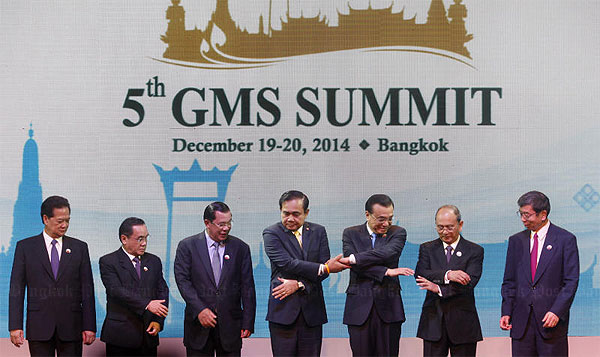 Take my hand: The leaders of six Mekong countries and the president of the Asian Development Bank pose for a group photo at the 5th Greater Mekong Sub-region Summit in Bangkok. (Photo by Thanarak Khunton)

Of the projects, 44% will be based in China, 26% in Laos, 10% in Thailand, and the rest divided between Cambodia, Myanmar and Vietnam, Deputy Transport Minister Arkhom Termpittayapaisith said.

The projects will be financed by a range of sources, including soft loans from China and regional financial institutions such as the Asian Development Bank.

The agreement was reached by the leaders of the six countries at the 5th Greater Mekong Subregion Summit, held at the Shangri-La hotel in Bangkok yesterday.

Chinese Premier Li Keqiang said he was "firmly committed" to the sustainable development of the Mekong subregion, saying investing in basic infrastructure would be a driving force.

His comments followed the signing on Friday of an MoU between China and Thailand for the construction of two double-track railway lines with a combined length of 867km.

"You have my word that the railway will be constructed with high-quality equipment and will set a good example for following projects on the Indochina peninsular," Mr Li said. China will also provide 100 million yuan (528 million baht) to Mekong countries for water management, he said, while the Asian Infrastructure Investment Bank would provide around $10 billion in loans. "China is also going to take larger amount of rice and rubber from Thailand," Mr Li said.

Prime Minister Prayut Chan-o-cha emphasised the necessity of the plan by fast-tracking the establishment of five special economic zones in the border areas of Tak, Mukdahan, Trat, Songkhla and Sa Kaeo. He said the move would help ensure connectivity with neighbouring countries.

He pointed to the fifth bridge to span the Mekong River between Laos and Thailand, which has just completed an engineering study and will begin construction soon.

"Each country should work as trading partners where our similar culture and traditions can be shared, not as competitors," Gen Prayut said. "Benefits will come from a relationship based on reliability, not suspicion."

Lao Prime Minister Thongsing Thammavong also called for greater commitment to upgrading roads across the region to serve trucks hauling loads greater than 11 tonnes, as well as boosting efforts to address a shortage of skilled labour.

Transport Minister Prajin Juntong said yesterday Japan has expressed interest in investing in any or all of three new rail routes in Thailand.

Gen Prayut is planning a visit to Japan soon to discuss the rail projects with Prime Minister Shinzo Abe, whose government was re-elected last weekend.