Myanmar migrants haunted by memory of tsunami missing in Thailand

BAN NAM KHEM, PHANGNGA - A decade after towering waves wrenched her newborn baby from her arms, Mi Htay remains haunted by memories of the children she lost in the tsunami whose bodies, like hundreds of other Myanmar migrants in Thailand, were never identified. 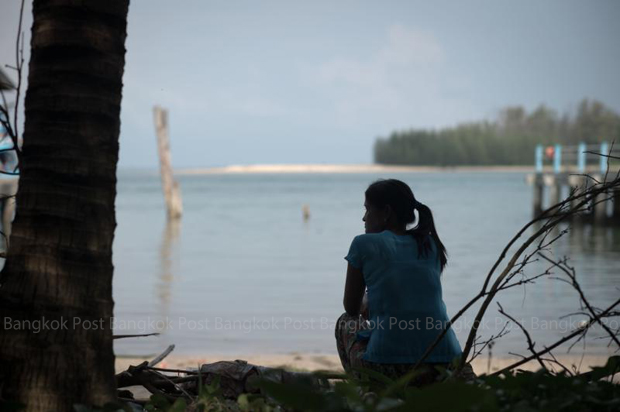 Myanmar national and migrant worker Mi Htay sat on a beach near her house in Ban Nam Khaem in Ta Kuapha district in Phangnga province on Dec 3, 2014. — AFP

No one knows exactly how many foreign labourers died when the tsunami cut into southern Thailand as most lacked official work permits and their relatives did not come forward in the days and weeks after the Dec 26, 2004, disaster fearing arrest or deportation.

An estimated 2,000 migrants from neighbouring Myanmar are thought to have perished, deaths that went almost unnoticed as the television cameras focused on foreign tourists and Thai victims.

Among them were Mi Htay's eight-day-old baby -- too young even to have been given a name -- two of her other children, both toddlers, as well as her mother and a nephew.

Despite the aching reminders of her loss, Mi Htay returned around a year later to the small coastal village of Ban Nam Khem, in Ta Kuapha distict in Thailand's worst-hit Phangnga province, in search of work in the area's fisheries.

"When I am working, I can forget what happened," the now 40-year-old told AFP, pointing out the spot where the waves pulled her newborn away from her grasp.

"But when I see other families with their children going to eat, I feel so sad. If they were alive, we would be like that. I can't forget it for one day."

In 2006 Mi Htay -- whose two oldest children survived the disaster -- was informed that the bodies of her mother and nephew had been identified as part of what was, at the time, the biggest global forensic investigation.

The Indian Ocean tsunami, which was sparked by the third-largest earthquake on record, claimed more than 220,000 lives in one of the world's deadliest and most geographically widespread disasters.

More than 3,000 bodies were identified and returned to families across the world by Thai and international experts in the years after the tsunami using dental records, DNA or fingerprints.

But Mi Htay's three missing children were not among them.

"I presume they are dead. But maybe they are alive as they haven't found the bodies. Maybe they are with other people. I keep thinking like that," she said.

Other than a small sign in Thai pointing to a nearby evacuation shelter, there is little evidence of the tsunami that wiped out nearly half of the village's 5,000 people.

The sparsely furnished apartments Myanmar nationals rent from Thais have been rebuilt and the pier is bustling with migrants sliding bucket-loads of freshly-caught fish off boats and into factories, where workers like Ma Mee Htay gut fish for around US$10 (330 baht) a day.

There are more migrant labourers in Phang Nga province than before the tsunami and now most are registered, says Htoo Chit, director of the Foundation for Education and Development charity.

An estimated two million Myanmar nationals work in Thailand, where they make up part of a vast migrant labour force often working in low-paid jobs and poor conditions, subject to exploitation.

Htoo Chit recalls the difficulty in identifying the decomposing bodies of undocumented victims with no official records, a problem compounded by the mass deportation of over 2,500 migrants in the aftermath of the tsunami.

"Most of them (the deported) lost their relatives. They didn't want to come back to Thailand again to claim the dead," he said.

Htoo Chit estimates around 1,000 Myanmar migrants were killed or missing in Phang Nga alone. Human Rights Watch estimates the overall figure at some 2,000 for all six tsunami-hit Thai provinces.

Some of these deaths are accounted for in Thailand's official toll of 5,395. The national police forensic department has recorded around 400 people still missing, a quarter from Myanmar.

At the nearby Bang Muang cemetery, 369 bodies lie unidentified beneath concrete headstones labelled simply with serial numbers on laminated cards. Authorities believe the majority are Myanmar nationals but have no DNA samples to check against.

The remains of a further 49 Thai nationals lie identified but unclaimed.

At the far end of the graveyard, an empty stainless steel coffin serves as a reminder of the scaled back -- but still ongoing -- operation to return corpses.

Up until last month it had been the resting place of Nepali tailor Rajan Dhaurali, whose body was identified through a DNA match with his sister two years after he died in neighbouring Khao Lak.

But, without the documents to show he was a Myanmar national, like others in his family who hold Myanmar passports but are Nepali by origin, police refused to release the body, according to the Phuket Thai-Nepali Association.

It helped track down Dhaurali's children and the documents required to retrieve the remains after it was alerted to the case by media outlets ahead of the tsunami anniversary.

At the house where she now works as a live-in nanny in Patong town, his daughter Depa, 20, said her family's deep grief was tinged with relief after finally cremating their father in November.

"I couldn't believe it after 10 years... It felt bad, but in some ways it's a relief. I would like to find my sister and mother too," Depa said of the two family members who died the same day and whose bodies remain unidentified.

For now she, like Mi Htay, is focused on building her life anew in Thailand, learning to live with unanswered questions as best as she can.