The Anti-Money Laundering Office on Tuesday resolved to seize more than billion baht in cash and valuables from former Central Investigation Bureau chief Pongpat Chayapan and other suspects in his alleged criminal ring. 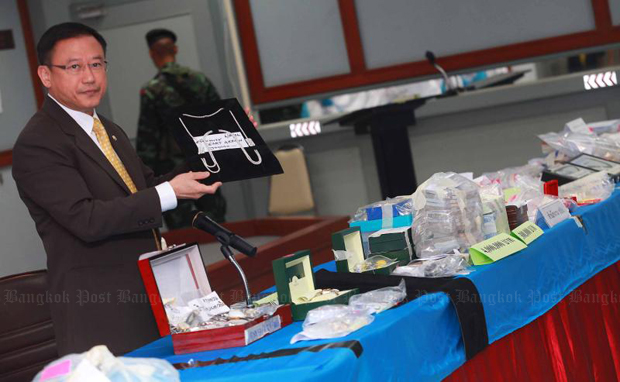 Owners of those assets would be summoned to clarify their origins and, if they fail to do so, Amlo will seize and auction them to generate revenue for the state, Pol Col Sihanart said.

Pol Col Sihanart said investigation into the ex-CIB chief's alleged network is still going on as Amlo believes there are more illegally-obtained assets which have not been discovered yet.

The agency earlier froze title deeds for 104 land plots worth more than 400 million baht owned by Pol Lt Gen Pongpat and ordered a freeze on 111 bank accounts totalling about 100 million baht belonging to him and seven other individuals in the Pongpat network.

A police disciplinary committee on Tuesday approved a proposal to expel the six police officers charged in the Central Investigation Bureau chief case since they confessed to six of the charges, said deputy police chief Pol Gen Ek Angsananon.

An order will be drafted and submitted to police chief and should take effect in 1-2 days. A sacked civil servant will not be entitled to compensation, pensions or benefits.