While addressing People Alliance for Democracy protesters in November 2008, Mr Kasit said Thaksin was trying every way to seize the country and make it his personal asset. 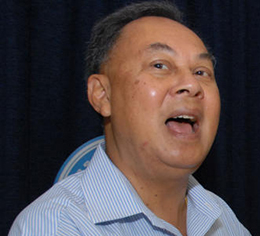 Kasit: It's not my intention to slander anyone.

He also said Thaksin had issued orders to kill Thai Muslims in the South and for extra judicial killings of drug suspects and that Thaksin wanted to become the president and topple the monarchy.

Thaksin filed a suit against Mr Kasit as the first defendant and Thaiday.com Co Ltd and ASTV (Thailand) Co Ltd as the second and third defendants respectively for publishing the speech.

In dismissing the case, the court reasoned since Thaksin was a public figure, he could be criticised. While some impolite words were used, Mr Kasit intended to protect the country's interests and an important institution. The court was therefore convinced he was expressing his opinions honestly.

As the media publishing the speech, the second and third defendants were acquitted.

Mr Kasit thanked the court and lawyers after the ruling, saying what he did not intend to slander anyone that day. He also apologised if it was regarded as a violation.

"From now on, I'll focus on working in the best interests of the country and the public and will continue to fight for what's right," the former foreign affairs minister during the Abhisit Vejjajiva government said.