Police are questioning suspects and searching several locations as they believe many more people are involved in the 1-billion-baht embezzlement scandal at King Mongkut's Institute of Technology Ladkrabang (KMITL). 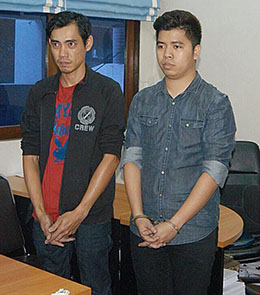 Pol Col Nos Sawetlek, deputy commander of the Crime Suppression Division, said on Saturday that police officers believed several people were involved in the embezzlement beyond the four now in custody.

Early on Saturday morning, the fourth suspect, Samut Sakhon resident Jariwat Sahaporn-udomkarn, 32, surrendered. He is believed to be among the people who transferred the money stolen from the university over the past two years.

Mr Jariwat denied all charges and any knowledge of Poonsak Boonsawat, another suspect. But investigators learned there were middlemen who connected all the wrongdoers in the elaborate scam, Pol Col Nos said.

Mr Poonsak, 26, of Laksi district in Bangkok, surrendered earlier and has been in custody since Thursday.

"Authorities believe that it was an act of a cartel and many more people are involved. ... Everyone knows the source of the money and the money transfer methods," said Pol Col Nos.

"In this case, when a huge sum was received, it was split and spent on houses and assets to launder it. I believe the money was transferred to many more accounts but about 1 billion baht remains in the system."

On Monday, he will summon former KMITL rector Thawil Phuengma and other officials authorised to withdraw money from the school's accounts for questioning, the deputy CSD commander said.

He will also ask the Anti-Money Laundering Office, the Office of the Auditor General and the Department of Special Investigation to help since the embezzled money was used to buy residential properties and assets and to set up companies.

Pol Col Nos said one of the businesses it was looking into belonged to Kittisak Matthujad, 32, another suspect still at large.

The deputy commander said that although all suspects in custody denied the allegations, police had enough evidence to prosecute them.

On Saturday afternoon, interrogators sought search warrants for many locations. They include Mr Poonsak's unit at The Key condominium on Chaeng Watthana Road; Mr Kittisak's Matthujad Co in the Thana Phirom housing estate in Muang Samut Prakan; and a house in Laksi district of a daughter of 44-year-old Sombat Sopradit, another suspect at large.

Mr Jariwat and Mr Poonsak are believed to have opened bank accounts for money stolen from the university over a two-year period. Police found that Mr Poonsak had transferred 55 million baht to Mr Jariwat.

It was reported earlier that suspicion first arose when Mr Poonsak, a graduate student, had bought a house with 25 million baht in cash.

Police now have four suspects in custody and have arrest warrants out for two more people.

Amporn Noisamrit, the 56-year-old head of the financial division at KMITL, was transferred on Saturday from Thainakarin Hospital to Police General Hospital where police are watching her around the clock. She is diabetic and depressed and her blood sugar needs to be controlled, authorities said.

The woman is at the centre of the embezzlement scandal, together with Songklod Sriprasong, 40, a former manager of the Big G Srinakarin branch of Bank of Ayudhya. The pair were detained earlier this week.

Both were accused of falsifying documents to withdraw money from the institute, pretending that it was deposited in bank accounts. The fraud is alleged to have taken place between 2012 and 2014.

Police are focusing their investigation on four accounts at branches of Siam Commercial Bank (SCB), from which 29 withdrawals totalling 994 million were made since 2012. SCB was ordered to suspend the accounts pending further investigation.

As well, investigators told Thai Rath this week, amounts ranging from 10,000 to 100 million baht had been withdrawn from KMITL accounts while Mr Songklod was a Bank of Ayudhya (BAY) branch manager.

In his statements to police, Mr Songklod said he had known Ms Amporn since he was a junior employee at SCB. He claimed that while working at BAY, he never withdrew cash from the KMITL accounts on his own, but only withdrew funds to be transferred to the accounts of third parties as indicated by the customer, Ms Amporn.

He denied knowing any of the people whose accounts were used to deposit the money.

All of the suspects in custody have been charged with money laundering in addition to theft and document falsification. 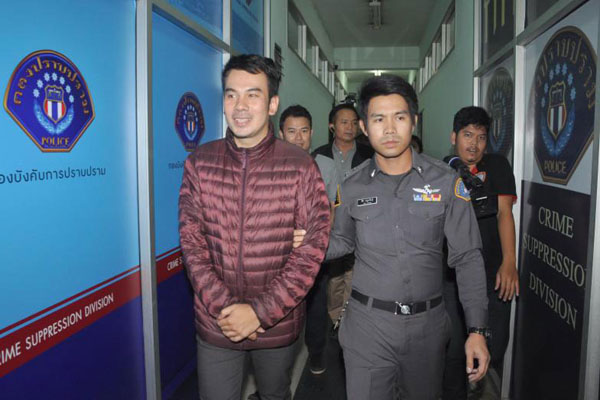 Songklod Sriprasong, 40, a former manager of the Big C Srinakarin branch of Bank of Ayudhya, is taken into custody by Crime Suppression Division officers earlier this week. (Photo by Wassayos Ngamkham)