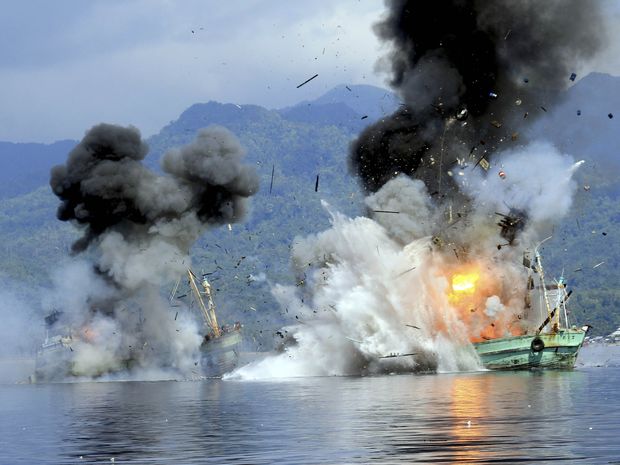 Two foreign flagged fishing boats registered in Papua New Guinea are destroyed by the Indonesian navy after they were seized earlier for supposedly illegal fishing off the coast of Ambon, Maluku, on Dec 21, 2014 in this photo taken by Antara Foto. (Reuters)

The Jakarta Post on Monday reported the officers used bombs to sink the vessels in Anambas waters near the South China Sea.

The move followed a court verdict on Dec 23 that they were involved in illegal fishing near Anambas Island in Riau Islands province.

The 70-gross-tonne MV Kour Son 77 was caught by the Indonesian navy on Nov 14 with six crew on board — two from Thailand, three from Myanmar and one from Laos. The 103-GT Chawat 5, which could not provide any legal documents to operate in Indonesian waters, was seized on Dec 11.

Earlier this month, a Thai fishery group warned of the risk.

Indonesia vowed to sink all ships stealing its fish in a bid by President Joko Widodo, better known as Jokowi, to protect domestic marine resources.

He said during his presidential campaigns such thefts cost Indonesia 300 trillion rupiah (780 billion baht) a year and 5,400 illegal trawlers illegally plied Indonesian waters, according to the Antara news agency.

Jakarta backed up its threats by capturing 155 foreign boats through Dec 9 and sinking three Vietnamese trawlers a day before the policy's official launch date.

"We sank three of them on Friday [Dec 5] to teach them a lesson, so that they will give up poaching in Indonesian waters," Jokowi told Antara on Dec 6.

After taking criticism from foreign governments, Jokowi again defended his decision on Dec 9, calling it a necessary deterrent. "I asked our foreign minister to explain that this is a purely criminal issue and has nothing to do with neighbourly relations," Mr Widodo told AFP.

On Dec 21, another two vessels from Papua New Guinea were destroyed on the shore of Ambon, Maluku, according to the Jakarta Post.

Under Article 69 of Indonesia's 2009 fisheries law, investigators or fishery supervisors can "take specific actions of burning and/or sinking foreign vessels based upon sufficient initial evidence".

Mr Praporn admitted Thai trawlers might be undeterred by sinking threats and would continue risking an incursion into Indonesian waters. "Fishermen have to survive. They could not bear the loss in every trip out to the sea and we have to admit that almost no fish is left in Thailand," he said. "Sometimes they have to take the risk."