Two of the six accused in the murder of property developer and political critic Akeyuth Anchanbutr have been sentenced to death, commuted to life in prison because they confessed. 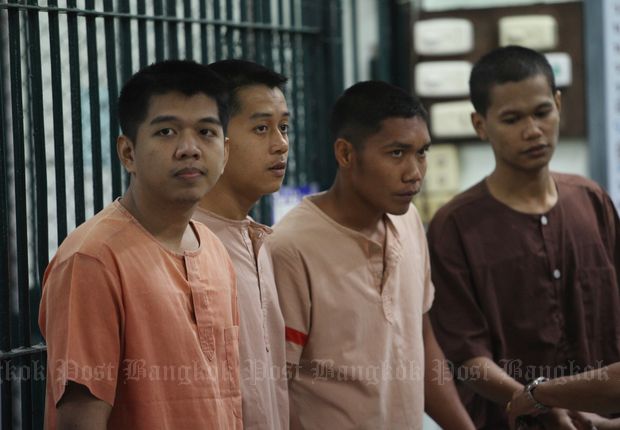 Santiphap (left) and the other accused in the Akeyuth Anchanbutr murder case are taken to court on Dec 30, 2014. (Photo by Tawatchai Kemgumnerd)

Akeyuth, 59, a vocal critic of fugitive ex-prime minister Thaksin Shinawatra and his sister Yingluck, disappeared in early June 2013. His van was later found in Phatthalung province.

Santiphap Pengduang, his driver, was subsequently arrested in Samut Songkhram province. He confessed to kidnapping and killing Akeyuth and burying the body in Phatthalung.

Santiphap, who implicated two of his friends as accessories, said money was the motive. Besides, he claimed he was angry because the tycoon verbally abused him.

His parents, who were charged with collaborating to hide evidence, were sentenced to 16 months in prison.

Six people were indicted on eight charges in this case, mainly collaborating to rob and kill and keeping stolen assets.

After kidnapping Akeyuth, Santiphap and his friend Sutthipong Pimpisarn, using guns and knives, forced  Akeyuth to withdraw cash from his accounts, taking assets totalling 6.6 million baht from him. They then strangled him and buried his body at a deserted farm in Phatthalung.

The court initially handed down the death sentence for Santiphap and Sutthipong, but since both had confessed the sentence was reduced to life in prison. The two grave diggers, Chaowalit and Thiwakorn, received prison sentences of eight and 13 months respectively.

Santiphap said after the ruling he would appeal. Akeyuth's son said that while he was satisfied with the conviction he had yet to decide whether to appeal the sentence.

Akeyuth was the head of the controversial Charter Investment pyramid scheme, which collapsed in 1983.

He fled to England in 1984 to avoid charges. Akeyuth then invested the proceeds of pyramid scheme in a chain of oriental supermarkets.

In 2004, after the 20-year statute of limitations ended, he returned to Thailand and launched a campaign against Thaksin and, later, Ms Yingluck.