Nopporn Cheanklin has been tipped as the new managing director of the Government Pharmaceutical Organisation (GPO).

A GPO source yesterday confirmed the board decided to select Dr Nopporn from three other candidates, after a four-hour debate on Thursday night. 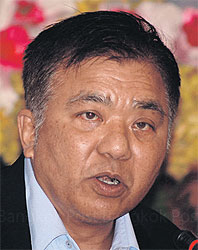 Dr Nopporn has been working as deputy director-general of the Department of Disease Control at the GPO.

The selection has yet to be officially announced as the choice of the board will soon be submitted for cabinet approval.

Dr Nopporn is well known for his role in pushing forward tobacco control measures including a recent policy proposal to enlarge health graphic warnings to cover more than 85% of cigarette packaging.

He has also collaborated with academic and civic groups to campaign for the banning of all kinds of asbestos in Thailand. Dr Nopporn told the Bangkok Post that he had not yet received official notification about the selection. But many people have already congratulated him.

"The GPO mission is to increase access to medicine for the people," he said.

He said he intended to solve the GPO's existing problems including medicine shortages in hospitals across the country.

The GPO managing director position has been vacant since last November after Suwach Siasiriwattana was sacked by the post-coup GPO board for his substandard performance.

Social media can have a powerful impact on the Thai political landscape, with alternative communication platforms such as Telegram and Bridgefy gaining momentum.

Thailand could get the first batch of a Covid-19 vaccine in June at the earliest, if the jab developed by AstraZeneca is approved for mass roll-out.

Investor worries over domestic political protests pulled down the benchmark SET index by 2.02%, closing at 1,208.75 points on Monday in trade worth 54.01 billion baht.