NARATHIWAT — The Chanae district chief escaped unhurt when a motorcycle bomb believed intended for him exploded on Wednesday afternoon as he was driving by. 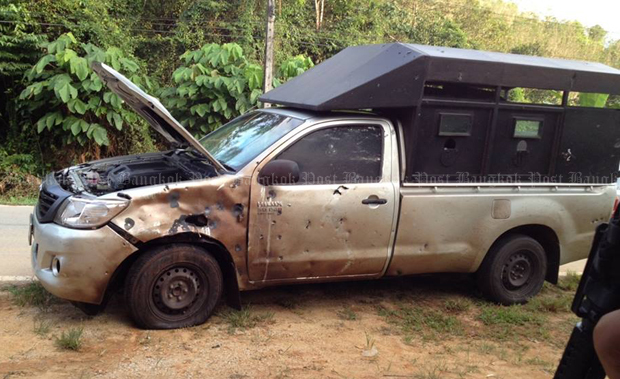 A pickup truck carrying the Chanae district chief and four defence volunteers was damaged by a motorcycle bomb in Narathiwat on Wednesday. All onboard escaped death and serious injury. (Photo by Waedao Harai)

The bomb went off at about 3.30pm on a road outside a kubo (a Muslim cemetery) at Ban Nam Won in tambon Chang Puak while Atthapol Sonsakul, the Chanae district chief, and four defence volunteers were travelling in a pickup truck to the district office.

Police found that explosive material had been packed into a 20kg gas cylinder and detonated with a communications radio.

Pol Lt Thanin Kanpai of Chanae police station said the gas cylinder was placed in the front of a motorcycle parked on the side of the road. When the group drove past, insurgents hiding nearby detonated the bomb.

A bystander, Da-o Arlee, 60, who was crossing the road at the time of the bombing, sustained shrapnel wounds to his left arm and was taken to Chanae Hospital by local residents. 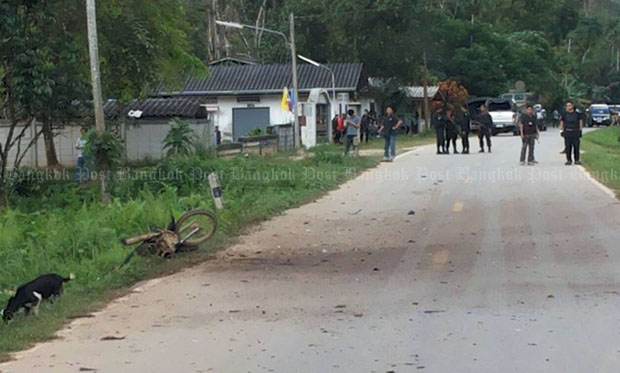