Thanadol Parntuwutipak makes small marks along one of the lines on his client's hands. The old palm reader and astrologer then utters barely audible predictions as he goes over the markings.

"Your health line runs smoothly until your 50th year where another line crosses it. If you survive this health crisis, you will live to be very old," the old man deadpanned.

Clearly, his predictions were not open to question. 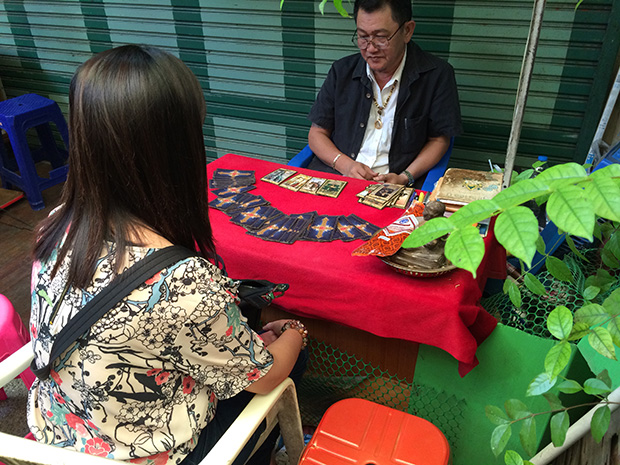 A tarot card reader foresees the future for a customer on Bangkok’s “fortune teller’s avenue” next to Thammasat University. (DPA photo)

Mr Thanadol is just one of many astrologers, tarot-card readers and mystics lining "fortune teller's avenue" next to Thammasat University. According to him, everyone from love-struck college students to ageing professors comes for advice.

But while Western concepts of fortune telling evoke pictures of crystal balls and oversized turbans, the Thai alternative is much more matter of fact, a serious endeavour where advice and predictions can lead to life changes. People have changed addresses and surnames to better match their star sign or to escape a bad prediction.

"We don't consult [the mystics] all the time, only when you are in a tight spot or need guidance," said Panita Chenvanich, a 22-year-old engineering student.

Ms Panita was having trouble choosing between several prestigious universities. On her mother's advice, she visited a fortune teller, who supposedly revealed what lay in store for her at each one.

The advice of the mystics is not limited to just personal queries either. Pumsaran Tongliemnak remembers when he first returned from his graduate studies at Stanford University to take a position at the Ministry of Education. 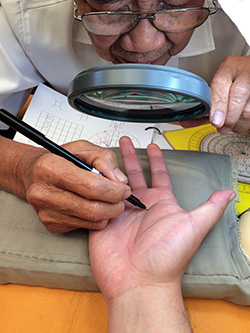 "My future boss, a senior government officer, told me that I should check with the astrologer when is a good day to start my job so that I'll have a smooth, prosperous career," said Mr Pumsaran. "I was quite amazed but not totally surprised."

According to prominent historians Pasuk Phongpaichit and Chris Baker, the employment of supernatural consultation stems from its use in the royal courts and by the traditional elite.

Writing for the Siam Society journal, they noted the important role that astrologers played in the decision-making of monarchs when building temples, founding cities or declaring wars.

Mr Pumsaran agrees with the assessment: "Historically speaking, astrology was regarded as a sophisticated subject of learned men in courts or monasteries."

According to historian Charles Keyes, when Thaksin was deposed in a coup, his military successors also consulted fortune tellers and astrologers for the best date to launch the operation to oust him.

Current Prime Minister Prayut Chan-o-cha, a retired military general, carries on the tradition. Gen Prayut has publicly stated that he consults fortune tellers, and said there was no harm in seeking their advice.

When he was suffering from a fever and aches early in his premiership, he blamed his malady on hexes cast by his political enemies and combated the illness with holy water.

But while consulting fortune tellers is readily accepted in Thai society, a growing number of people are growing disillusioned with the stubbornly persistent superstitions.

"We live in a society where the prime minister said that there is no harm in visiting fortune tellers, what if he is basing important decisions on the occult?" said a government sociologist who asked that her name not be used. "These habits are emblematic of society's inability to accept blame or work hard. We are always looking for a short cut or blaming our failings on unlucky dates because the truth is much more difficult to confront." 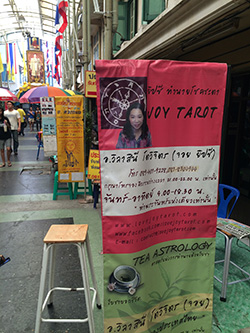 A sign for one of many mystics on “fortune teller’s avenue” next to Thammasat University in Bangkok. (DPA photo)

Others have more personal reasons for opposing the mystics.

Sarunrat Visutthithada, better known by her stage name Lydia, is one of the most recognizable faces in Thai popular culture. But her career was almost derailed shortly after she broke onto the scene at the age of 17, when a celebrity fortune teller announced that she was pregnant out of wedlock.

The rumours proved unfounded, but the fortune teller did not apologize.

"I think as a society we need to be more careful with whom we place our trust, especially since no consequences befall these people if they make wrong or damaging predictions," Lydia said.

In the opinion of Mr Thanadol and his fellow fortune tellers, he is neither doing anything malignant nor particularly mystical. He says he just relays information for his clients to make better decisions.

"It is not magic, just good science," he said. "I can't change what is written in the stars or the lines of your hand. I have no powers, just the education to see what the signs mean."

As for Ms Panita, she is still waiting for that "science" to make good on its university prediction. She eventually settled on the US University of Pennsylvania because she was told that she would find her true love while studying there.

"I've been here for three years already but I am sure fourth year's the charm," she said.