Senior anti-drugs officials from China, Laos, Myanmar and Thailand yesterday carried out inspections to observe anti-drug trafficking efforts in action along the Mekong River where up to 300 million methamphetamine pills are transported yearly. 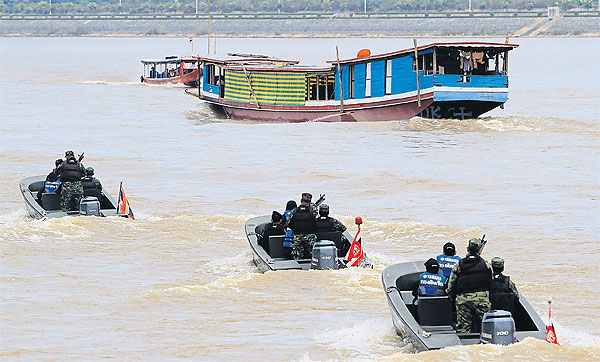 Naval officers and officials from the Office Narcotics Control Board patrol the Mekong River in Chiang Rai’s Chiang Saen district in a joint mission to find drug traffickers. TAWATCHAI KEMGUMNERD

Authorities from the four countries recently set up the Safe Mekong Coordination Centre (SMCC) to crack down on the traffickers.

The anti-drugs officials observed the Thai navy’s Mekong Riverine Unit in action, patrolling the river and carrying out searches on boats.

The Office of the Narcotics Control Board's (ONCB) secretary-general, Permpong Chaovalit, said all representatives from the four countries agree that the drug problem on the Mekong River affects their national security and stability.

Capt Phanu Rattanananthawathi, chief of the Mekong Riverine Unit in Chiang Rai, admitted that the number of arrests in the area was quite low as authorities in each country patrolled their own territorial waters.

However, he expects better results in combating drug trafficking with the launch of the SMCC.

Drugs are mainly smuggled in from these countries on cargo ships, Capt Phanu said.

The SMCC, which supports joint patrols along the river, hopes to catch more smugglers as authorities will start their patrols at the same time in each section of the Mekong, Capt Phanu said.

Along an 85 kilometre-section of the river there are 10 spots which need special attention, he said.

The spots include the Golden Triangle, an area near the borders of Myanmar, Laos and Thailand, the fourth Thai-Lao Friendship Bridge, which connects Chiang Rai’s Chiang Khong district and the Laos city of Houayxay, as well as ports along the river such as Chiang Saen, Hiran Nakhon and Lan Chang.

The centre will help build a strong relationship among the four countries and pave the way for economic cooperation for the Asean Community, he said.

The single community is set to be established at the end of this year.

But while it promises a bright future with trade and investment, the community could also lead to several problems such as illegal migrants and especially drugs, he added.