Abbot admits having sex with man

The abbot of a Buddhist forest monastery in Phetchabun has shocked his fellow monks and Buddhist followers after admitting to a sexual affair with a close male aide.

However, Phra Kasem Arjinnasilo claims that since he acted "without consciousness", the act was not grounds for defrocking him.

He made the surprising declaration in front of about 50 monks and followers who had gathered at the monastery to hold an internal inquiry about the allegations. The meeting was also broadcast on the popular monastery's YouTube channel.

The sexual encounter with a 34-year-old male disciple was alleged to have taken place in the monastery's compound. 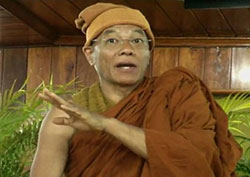 Phra Kasem: Outspoken acts have landed him in trouble before. (Photo from the monk's Facebook page)

"If you ask what I plan to do from now on, I don’t know," the abbot said. "If I am asked to leave the monkhood, where will I stay? I am alone and could not return home as I had left my family to enter the monkhood."

His remarks drew mixed reactions from his fellow monks and laymen. Many said the senior monk breached his vow of celibacy and that he must be defrocked. But some junior monks argued that the abbot's defence of acting "without consciousness" had some merit.

They agreed that a panel of senior monks should be asked to investigate. However, provincial and national Buddhist authorities appear ready to step in to conduct a more formal probe.

Sivanart Saenkaew, the abbot's personal manager and aide, said an inquiry must be set up, and if the abbot is found guilty he must leave the monkhood.

The outspoken abbot had previously come under heavy criticism after he was seen putting his foot on a table holding alms donations.

He also caused outrage two years ago when a video on YouTube showed him stepping on the base of a Buddha statue, slapping the statue's face and putting a sign on the brass statue urging people not to worship it because it wasn't Lord Buddha.

He was taken to court for tarnishing Buddhism and the Appeals Court handed him a suspended two-year jail term and a 20,000-baht fine. The Udon Thani Sangha where the monk was originally ordained had ordered him to leave the monkhood, but Phra Kasem continued to practise.

A source in the National Buddhism Office said that an investigation by the monastic authorities into the latest allegations to establish the facts would be needed, but statements gathered during the inquiry by disciples could not be used.

The Phetchabun provincial monastic committee would be responsible for a proper probe, said the source.