Construction has begun of the second Thai-Myanmar bridge across the Moei River, linking Mae Sot district in northern Tak province and Myawaddy town in Myanmar. 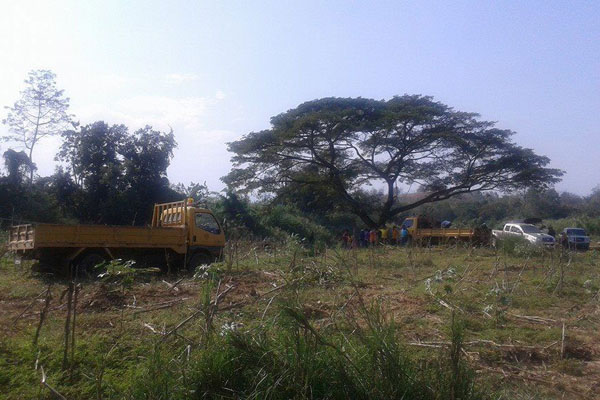 Highway Department workers enter the site at the beginning of the second Thai-Myanmar bridge in Mae Sot district in Tak province to start construction on Wednesday. (Photo by Assawin Pinitwong)

Mae Sot mayor Terdkiat Shinsoranant on Wednesday led a sub-committee of the National Legislative Assembly to the construction site, where the Department of Highways has started the work.

Tak governor Somchai Hathayatanti said that Deputy Prime Minister Wissanu Krea-ngam, Transport Minister Prajin Juntong, Commerce Minister Chatchai Sarikulya and a delegation of the NLA would inspect the site and an area to be developed into a special border economic zone, from Jan 23 to 29.

On the Thai side, the new bridge begins at Ban Wang Takhian Tai village in Tha Sai Luad sub-district of Mae Sot district. The four-lane bridge, to cost 3.6 billion baht, will serve the special economic area and be part of an east-west economic corridor stretching about 700 kilometres from Tak to Mukdahan province on the border with Laos in the Northeast.

The construction of the new bridge is expected to be completed in three years at the soonest and relieve congestion on the first and two-lane Mae Sot-Myawaddy bridge that cannot serve heavy trucks.

Local businessmen said the second bridge would probably double the value of border trade through Mae Sot from the 30 billion to 60 billion baht a year. The bridge and its approaches would be about 21 kilometres long, with a 17-kilometre section on the Thai side.

Mae Sot-Myawaddy trade serves local business as well as Bangkok and other provinces in the North, and Myanmar traders from Yangon, 450 kilometres from Mae Sot, and as a distribution centre for cargo in Myanmar.