Both her parents and police on the southern resort island of Koh Tao believe a 23-year-old British backpacker found dead there was not a victim of foul play.

Police said the body of Christina Annesley, 23, was discovered inside a bungalow room at the InTouch Resort on Koh Tao's Sai Ree beach late Wednesday. There were no immediate signs of criminal activity, but her body will be sent to Surat Thani on the mainland for an autopsy. A "selfie" taken by Christina Annesley and posted publicly to her Twitter timeline during her Thailand trip.

"There was no trace of a fight and her body has no wounds," Pol Lt Col Napa Senathit told AFP by telephone, adding that investigators discovered three kinds of medications in her room, but no recreational drugs.

The autopsy is not likely to be carried out before Sunday as officials have to wait for a ferry to the mainland.

"There is no ferry today so we will send her body on Saturday night to arrive on the mainland Sunday morning," Pol Lt Col Napa said Friday.

Annesley's death comes just more than four months after two other young British backpackers - Heather Witheridge, 22, and David Miller, 23 - were brutally killed on the same beach. InTouch Resort is managed by Montriwat Tuwichian, who was a person of interest early in the investigation of the two Britons' deaths.

Two Myanmar men - Win Phyo and Zaw Lin, both 21 - are being tried for their murders.

Annesley's mother, Christina, came out early to state she does not believe her daughter died due to foul play. Posting to her daughter's now-removed Facebook page, she wrote Thursday that "we have lost our beautiful daughter Chrissie in Thailand of natural causes."

"We are totally devastated. We love you so much darling, rest in peace. We will bring you home soon xxxxxxxxxx Mum and Dad," she wrote.

Annesley was a vocal libertarian campaigner for the UK Independence Party and was public with most of her life on social media, particularly Twitter where she documented most of her time in Thailand since arriving Jan 7. Her arrival here was the start of a four-month "gap-year" journey through Southeast Asia and Australia, where the Briton could enter on a New Zealand passport she also held.

During nearly all her time in Thailand Annesley was battling a chest infection, which left her feeling down on many days of the trip she was taking alone.

"Great, just as I finally make friends, I have to shell out £60 (about 2,900 baht) for antibiotics and now can't afford to go out with them. F*** everything," she wrote on Twitter Jan 21. Annesley's father, Boyce, told UK media they never heard from her after that.

On Twitter, Annesley posted several times she was taking Tramadol, a powerful painkiller, while drinking. In several tweets during the past two weeks she also joked about use of Valium, a tranquiliser, while battling the blues.

"I'm off to the beach to sulk and look at beautiful scenery and mong out on Valium," she wrote on Jan 16. 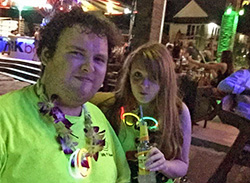 Christina Annesley and a friend, posted publicly to her Twitter timeline on Jan 19.

"Am now lying on a sunbed with an alcopop and a bucketload of Tramadol, so feeling a bit better," she tweeted the next day.

Annesley's friends, who got together near her home in Orpington, London on Thursday, expressed their sorrows and shock on social media throughout the day, with those closest to her saying she was enjoying her trip. A Russian backpacker who met her in Bangkok described her as "happy," "bubbly," and "having a whale of a time."

Certainly the scenic, yet manic, nature of Koh Tao opened her eyes.

"Seriously if Koh Tao is a sleepy diver's paradise, what the hell is Koh Phanghan like?" Annesley tweeted Jan 21. "A guy just jumped over a skipping rope made of fire butt naked. What a sight."

But she also added that she loved the sights and the weather. "In awe of how beautiful this place is..." she tweeted a day earlier.

"I need to bloody cheer the f*** f*** up and realise how privileged I am to be here and go to the beach and be happy."

People rush to buy old-fashioned transistor radios after Prime Minister Prayut Chan-o-cha recommended them as a reliable channel for flood information when other systems fail.