Seventeen foreigners of various nationalities have been arrested at a condominium in Chiang Mai for working illegally in the country after they were found providing online English courses to Chinese customers. 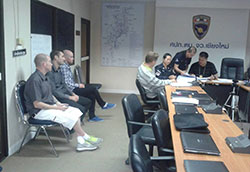 Seventeen foreigners of various nationalities are arrested and taken to Chiang Mai immigration police office for working illegally in the country. (Photo by Cheewin Sattha)

The 17 foreigners were apprehended at a modified office room in the ground floor of Riverside Condo on Chiang Mai-Lamphun Road in Muang district during a police raid about 12.30am Friday.

A police team,  led by Pol Col Rutjapong Sarnwanangkul, superintendent of the Chiang Mai immigration police office, found they were providing English language instruction via the internet to Chinese living in China, in both group and individual courses.  Partitions were erected to provide teaching rooms, equipped with notebook computers.

The language teachers were hired by BOI 360 Max Co, which set up its office room on the ground floor of the condominium.

A Canadian national who was among the 17 foreigners caught, claimed to be the manager of the online language firm, found to be operated without permission.

All foreigh instructors were asked to produce passports and work permits to authorities. Twelve of them carried passports but had no work permits. They were two German nationals, an Irish national, a French national, a Dutch national, two Britons, two Australians and three Americans.

Another American national had no work permit and had overstayed in the country, while the remaining four foreigners had passports and work permits, but they breached work conditions, said authorities. They included the Canadian man, who served as the firm’s manager, one American, an Australian national and one Philippine national.

A total of 10 notebooks and their passports were seized.  All foreigners were handed over to Mae Ping police station to face charges of working illegally.