The future looks bleak for both the Pheu Thai Party and the Shinawatra family now that former prime minister Yingluck Shinawatra has been impeached and barred from politics by the National Legislative Assembly (NLA) over her role in the loss-ridden rice-pledging scheme.

But it was the Office of Attorney-General (OAG) that stole the show yesterday. Just hours before NLA members cast their crucial vote, the OAG announced its intention to indict Ms Yingluck for dereliction of duty in failing to stop losses in the rice scheme as recommended by the National Anti-Corruption Commission (NACC). 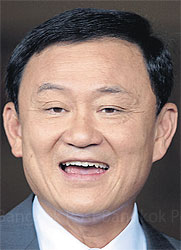 Thaksin: Could take ‘break’ from politics

Following the indictment and impeachment, the ex-premier turned to her Facebook page to denounce the decisions saying Thai democracy was dead, along with the rule of law as a movement bent on destruction continues. She ended her message with a quote from an academic: "If there is no Yingluck, the Thai people can still live on. But, more importantly, if there is no justice left in the governance of Thailand, no one can live on."

Her brother and ex-premier Thaksin Shinawatra, who fled a two-year jail term for abuse of authority, had reportedly told his close aides that Ms Yingluck would end up being impeached.

It has been reported that some Shinawatra family members hoped the case against Ms Yingluck would only be a political one, not a criminal one, and that an amnesty law would be passed to wipe her record clean.

However, Ms Yingluck's OAG case is clearly a criminal one which an amnesty will not cover.

Now the Shinawatras are probably hoping Ms Yingluck does not follow her brother, Thaksin, into exile.

A source in the Pheu Thai Party said that Thaksin may choose to "break" away from politics. It is possible that none of the Shinawatra family members will contest elections after a new charter is adopted and elections return. Thaksin seems to lack the enthusiasm to challenge those in power.

The need for the Shinawatra family to suspend or end their political roles is largely due to the post-coup atmosphere which differs completely from the one which followed the 2006 coup that ousted Thaksin.

Besides the deep-rooted political divisions, the damage caused by the rice-pledging scheme and the charges against Ms Yingluck are likely to put off some Pheu Thai supporters in the North and Northeast.

Several core Pheu Thai members are reportedly aware of the party's falling popularity in the provinces and in Bangkok. It is believed there is an emerging group of voters who are ready to support a political party that is not associated with Pheu Thai, the Democrat Party or the military.

Somjai Phagaphasvivat, a Thammasat University political scientist, believes Thaksin will be forced to take a break from politics, but the ousted premier will not just abandon Pheu Thai and will ensure that someone he trusts can run the party.

"He won't do it voluntarily as long as he is still breathing," said Mr Somjai.

However, Mr Somjai said Thaksin is unlikely to get his son, Panthongtae, involved. Former prime minister Somchai Wongsawat, his brother-in-law, has been deemed a probable choice.

Pheu Thai's political base will fade, mainly due to the Yingluck government's handling of the rice programme. Many rice farmers who were supposed to have benefited from the scheme are unhappy with the way they were treated, Mr Somjai said.

Moreover, some red shirts, who are Pheu Thai supporters, are reportedly considering distancing themselves from the party.

That may coincide with the response to the new charter being drafted which will initiate a new system where MPs do not have to be members of a political party. It is believed new parties will be formed which will tap into the support bases of the Pheu Thai and Democrat parties.