Authorities are on the alert for luggage snatchers at Suvarnabhumi airport following the recent arrest of a Taiwanese man who stole three designer bags from a Japanese traveller while the bags sat on a conveyor belt. 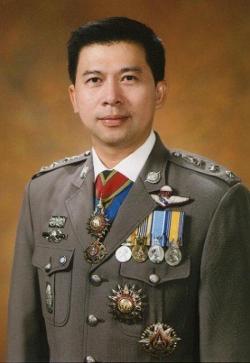 The theft exposed flaws in the airport's security and is worrying travellers in the queues at immigration control who don't know whether they will become the next victims.

Each year there are at least 50 cases of robbery similar to the one that hit the Japanese tourist, say police who are concerned the airport is being targeted by foreign robbers as a place to steal expensive baggage.

They raised the warning after they arrested Chiang Yu Ting last Monday and seized from him the three brand-name bags, a shoulder satchel and sunglasses, with a combined value of about 100,000 baht.

His arrest followed a complaint by Otsuka Tatusya, 51, who realised his bags were missing after waiting in vain at the baggage claim area. On Jan 18, Mr Tatusya arrived at Suvarnabhumi from Vietnam on a Thai Airways flight. After passing through immigration, he watched as other passengers collected their bags and left him standing alone at the empty conveyor belt.

Deputy Tourist Police Division chief Pol Col Rungrot Sayanprasoet was informed of the irregularity and, after determining their disappearance did not result from an airline mistake or other passengers accidentally picking them up, launched a search.

Investigators checked security camera footage near the conveyor belt and saw a suspect taking the silver, gold and black Rimowa luggage before leaving the terminal. Mr Tatusya identified the three pieces as belonging to him. Investigators canvassed the airport and learned the suspect left the airport in a private vehicle to a nearby hotel. Police staked out the hotel until morning when they saw a man emerge who looked like the person in the footage. He was leaving the hotel with the three stolen bags.

The suspect was later arrested at the airport as he was checking in at the China Airline counter.

Mr Chiang, 37, who was about to fly back to Taiwan, allegedly admitted he stole Mr Tatsuya's bags from the conveyor belt. He did not deny the alleged wrongdoing because his act was recorded by security cameras, the officers said.

He allegedly told police he often comes to Thailand "empty-handed" with only a small bag so he can easily rob passengers' luggage at Suvarnabhumi airport. Mr Chiang eyes only brand-name, expensive luggage, which he takes back to resell in Taiwan.

Pol Col Rungrot said Mr Chiang was careful: He always waited until he was certain the bag owner was not there. The suspect said his victims were usually passengers stuck in a long immigration queue or who had gone shopping for duty-free goods while leaving their belongings to go round and round on the luggage carousel.

Mr Chiang confessed to stealing bags eight times during 12 trips to Thailand, Pol Col Rungrot said. He resells each of the bags at about 40% below the market price, but he said the going rate also depends upon the condition of the bags.

"This case has damaged Suvarnabhumi's reputation and worried tourists," said Pol Col Rungrot. He has told police to tighten security at the airport.

However, a police source at the airport said they alone cannot prevent the crime. Airport staff must help police check travellers' bags before they leave the airport.

It is commonly known inspections of luggage tags are lax partly because of insufficient staff and the large number of passengers passing through at peak times, the source said.

"We have now talked to the airport about the tag issue," said Pol Col Rungrot, insisting only cooperation from all sides can end the problem.