National airline will not be allowed to declare bankruptcy

Debt-burdened Thai Airways International (THAI) will not need to declare bankruptcy because the government is supporting it, but it must undergo major rehabilitation including some asset sales, Prime Minister Prayut Chan-o-cha said on Monday. 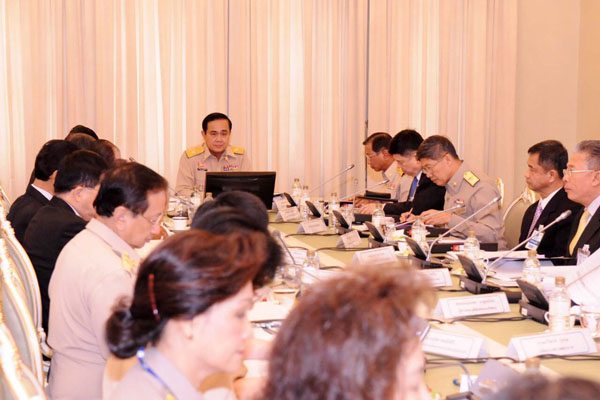 The financial failings of Thai Airways International were among topics on the agenda at the meeting of the government's state enterprise superboard, chaired by Prime Minister Prayut Chan-o-cha at Government House on Monday. (Government House photo)

After attending a meeting of the government's committee on state enterprise policies, the so-called superboard, Gen Prayut said solutions were being discussed .

The national airline would have to cut expenses, increase revenue, drop unprofitable routes, restructure its assets and sell some aircraft.

The airline would also have to make changes to management, personnel and staff benefits, and travel agents who take up ticket quotas would be fined for unsold, returned tickets, Gen Prayut said.

He said that THAI would have to sell some assets, such as the aircraft that are not being used. Sales of these assets would be direct to customer. There would be no middleman, he said.

Transport Minister Prajin Juntong said that THAI would reduce its workforce from 25,000 to 20,000. THAI president Charamporn Jotikasthira said the plan to slash about 5,000 jobs will be carried out only after other measures to control and cut costs have failed.

Retrenchments will emphasise voluntary resignations with no lay-offs, he said.

The state enterprise supervisory committee considered a rehabilitation plan proposed by Thai Airways and the management was allowed to proceed with the proposal, Gen Prayut said.

The national flag carrier would not be allowed to declare bankruptcy to solve its debt problems. The government was supporting it, he said.

The company's financial statements submitted to the Stock Exchange of Thailand showed THAI lost 9.2 billion baht in the first nine months of last year, with total debts of 262.5 billion baht. The state enterprise reported a loss of 12 billion baht in 2013. 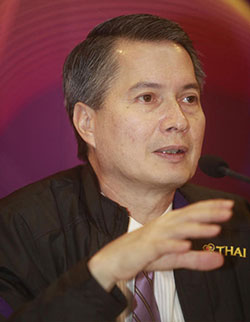 THAI president Charumporn Jotikasthira said the rehabilitation plan should enable the airline to stop its losses within this year and, in two years, it would grow fast and sustainably.

To stop losses as soon as possible, THAI will suspend routes that do not perform - about 10% of all routes, he said, citing Phuket-Seoul and Bangkok-Johannesburg routes as examples.

Its affiliate Thai Smile airline would take over some of the routes such as those to Surat Thani, Udon Thani and Ubon Ratchathani provinces and their flight frequencies would decrease, Mr Charumporn said.

THAI also will sell 22 of 102 planes by the end of July, but has yet to decide on other assets, such as overseas residences and offices and ownership shares in hotels. The airline also will postpone acceptance of new aircraft, he said.

Reductions in its workforce would be the last resort and be on a voluntary basis, he said.

Mr Charumporn also said THAI has no liquidity problems and would not need to borrow this year, but its income will not reach 200 billion baht this year.