Russian accuses ME gang of theft

A Russian tourist has accused a Middle Eastern gang of stealing 55,000 baht from him at a convenience store in Pattaya in the early hours of Wednesday. 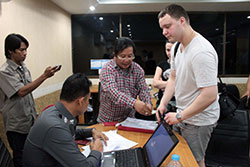 Rinai Safin, 26, filed a complaint with Pattaya police against the gang, claiming they tricked him and took US$1,700 (55,246 baht) from him at about 1am on Wednesday.

He said he and his girlfriend were buying goods at a convenience store on Soi 23 off Pattaya-Naklua Road in Chon Buri when the suspects, in a family group, approached him in a friendly manner. The suspects pretended to exchange money for dollars with him. But after they left, he found that his cash had been stolen.

Police are examining footage from a CCTV camera in the store to try to identify the suspects.

A police source said similar incidents had occurred in Pattaya before. Other foreigners had filed complaints over cash theft, and claimed the perpetrators were mostly from the Middle East.