The Suvarnabhumi airport taxi driver caught on video cheating a Japanese passenger today faced the music when he reported to the Department of Land Transport.

Udon Sasanasupin, 61, met inspectors at 6am. He paid a 3,000-baht fine, was reprimanded and ordered never to service passengers at the airport again. Authorities also warned him not to repeat his offence or he would lose his taxi-driver's licence. 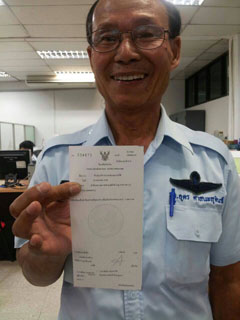 On Dec 26, Mr Udon reportedly covered the screen of his fare meter with a cloth while queuing at Bangkok's Suvarnabhumi airport. Later, his Japanese passenger discovered his fare began at 75 baht instead of the official rate of 35 baht.

The driver later claimed he forgot that he had activated the meter well before the client got on his vehicle. However, the passenger's video clip showed that Mr Udon first tried to lie that authorities had already raised the start fare to 75 baht.

Teerapong Rodprasert, director-general of the Department of Land Transport, said on Friday that he ordered certified taxi-meter suppliers to find ways to prevent any party from modifying the devices to cheat passengers.