Japan reaffirms commitment to rail while pushing for early elections

Japan on Monday reaffirmed Tokyo’s commitment to railway and infrastructure development in Thailand even while pressing Prime Minister Prayut Chan-o-cha for an early return to democracy.

Gen Prayut, who began a three-day visit to Japan Sunday, signed a memorandum of intent with Japanese Prime Minister Shinzo Abe for Tokyo to cooperate in building train routes in Thailand, including one between Bangkok and Chiang Mai, according to Kyodo News.

The two leaders also agreed to enhance the two countries' "strategic partnership" and confirmed Thailand's commitment to an early restoration of democracy, with Gen Prayut saying a general election for a new government is possible by the end of this year or early next year.

"Prime Minister Prayut is putting all his power into restoring democracy," Bloomberg News quoted Mr Abe as saying. "Japan has strong expectations for reconciliation among the Thai people and a return to democracy as soon as possible."

But talk of democracy was largely overshadowed by economic interests in a day full of bilateral commitments.

Japan's commitment to developing railway infrastructure, the two sides said in their pact, "has immense significance for further development of the Thai economy and the enhancement of connectivity within the region."

Gen Prayut is scheduled to take a "shinkansen" high-speed train ride from Tokyo to Osaka on Tuesday before heading home from Osaka. It was not immediately known whether the two leaders discussed a possible introduction of the shinkansen bullet-train technology to Thailand.

In other topics, Mr Abe also requested that Thailand promptly lift its restrictions on Japanese food imports imposed after the 2011 nuclear disaster in Fukushima over concerns about radioactive contamination. 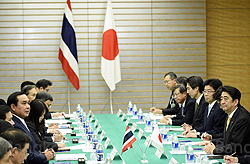 He also reaffirmed Japan's cooperation in development of the Dawei Special Economic Zone in southern Myanmar, a joint project between Thailand and Myanmar, according to an official.

Finally, in a joint press statement issued after the meeting, the two governments said they recognised that "the international community must stand united in not giving in to terrorism and work to maintain international peace and security."

Gen Prayut called for confidence from Japanese investors on Thailand, which will move forward after undertaking the comprehensive reform.

WASHINGTON - US pop star Pink has offered to pay a "sexist" fine levied on Norway's women's beach handball team after they refused to wear bikini bottoms during a game in the Euro 2021 tournament.

A proposal to allow eateries and restaurants in department stores and shopping malls to sell food via online delivery platforms will be presented for approval.

WASHINGTON - The United States said Monday it would maintain restrictions on international travel into the country, sidestepping European pressure, pointing to a surge of cases of the Covid-19 Delta variant at home and abroad.