Imagine this. With a few taps and swipes on your smartphone, a brand-new hybrid Toyota Prius will rush to your door, with a polite, smiling chauffeur who never turns you down or asks for extra charges when you name your destination.

Inside, the cab is cool and clean, equipped with the latest safety equipment, including a speed regulator and a "black box" or data-recording device, as well as a personal screen for entertainment in case you get caught in traffic. Once reaching the destination, you can choose to pay by credit or ATM card so you don't have to bother with change.

Welcome to All Thai Taxi, a new service provided by Nakhonchai Air Co Ltd, a Thai company that strives to compete with international brands like Uber and GrabTaxi, at least on the Thai turf.

Nakhonchai Air, which until now offers inter-provincial bus services on fixed routes, on Tuesday introduced the taxi service, with a fleet of 500 Prius sedans ready to ply Bangkok streets in April. The official launch date is set for May 1. 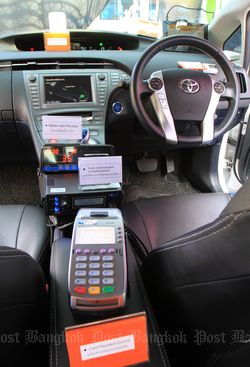 The cab is equipped with a data recording device, an entertainment screen and credit card payment. (Photos by Tawatchai Khemgumnerd)

It charges 20 baht for each trip plus the fares based on the rates set by the Transport Ministry.

Like Uber and GrabTaxi, users can book a taxi through its smartphone application and the 1624 call centre around the clock. Unlike Uber, commuters can stop one on the streets as they see it so long as it does not have the "in service" sign.

Anant Wongbenjarat, president of Nakhonchai Air, said his company invested 700 million baht in the service, which he guaranteed would never reject passengers. The company hopes to break even in 5-7 years.

"We want the service to be the prototype for Thai taxis by setting the standards for safety, conveniences, and technology. We use environmentally friendly cars, an app that can check routes and send comments and complaints directly to us, a GPS device, a black box that contains chauffeur information, a speed regulator and entertainment screen," he said.

"All 1,000 drivers are our own employees who have been trained. They receive fixed salaries, as well as commission fees and bonuses. We also have lady taxis with female chauffeurs to serve female passengers upon request," he said in a veiled reference to Uber, which was partially banned late last year.

The UberX service, which deploys private cars, was ruled illegal by Thai authorities late last year because the vehicles were not registered to provide public service.

Teerapong Rodprasert, director-general of the Land Transport Department, said authorities wanted taxi operators to improve services and All Thai Taxi was the first to do so.