A fierce fire broke out at a 20-rai rubbish dump in Samut Prakan's Muang district in the early hours of Feb 13. (Photo by Sutthiwit Chayutworakan)

A huge fire broke out at a garbage dump in Samut Prakan province in the early hours of Friday. 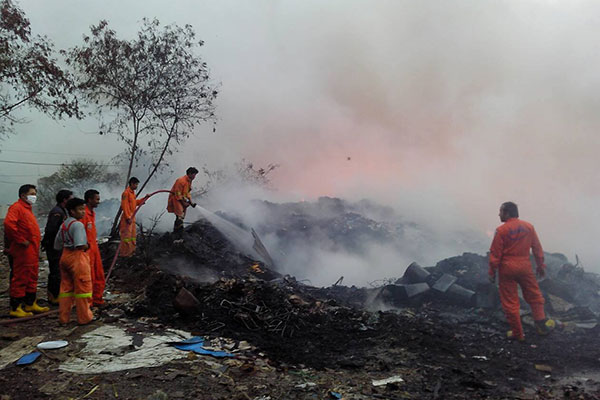 The burning rubbish dump in Samut Prakan was finally declared under control six hours after the blaze erupted early on Feb 13. (Photo by Sutthiwit Chayutworakan)

About 20 fire trucks and crews from tambon Phraeksa and nearby areas were deployed to the private dump at Soi Tonson in tambon Taiban Mai of Muang district to hose down the burning site.

The blaze, which started about 2.30am on Friday, sent foul-smelling thick, black smoke high into the sky, police said.

Scavengers living near the dump moved their belongings away in panic as dry waste, piles of plastic and other flammable materials fuelled the fire.

Residents said strong winds caused the fire to spread quickly. Workers and local residents tried in vain to control the huge blaze. Many ran for their safety and alerted authorities.

The fire was finally declared out about 8am. About 2 rai of the 20-rai dump were burnt.

Locals said the dump had been closed a long time ago and it had previously caught fire 4-5 years ago.

This fire-gutted dump is reported to be not far from a large dump burned by a massive fire in March last year. The site, covering 150 rai of land at in Soi Praeksa 8 in tambon Praeksa of Muang district, had sent dangerously high levels of toxic substances in the air more than 24 hours after the blaze began. Authorities had declared site a dangerous zone at the time. 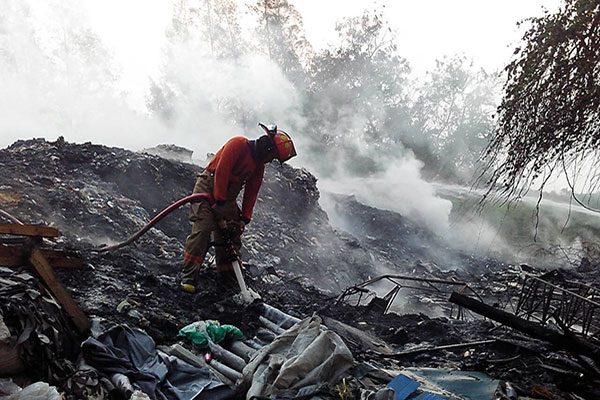 Smoke blankets the sky over the fire-gutted garbage dump in Samut Prakan after the blaze was put out. (Photo by Sutthiwit Chayutworakan)