Army chief Udomdej Sitabutr has warned an anti-coup group which recently staged a rally that it could face legal action if it holds more protests.

Members of the group, some of whom were arrested last Saturday for holding a mock "election", told the Reuters news agency they intend to continue their protests.

Gen Udomdej, who also serves as deputy defence minister, said Monday that legal action may be taken against people who protest against the coup because martial law is in place to limit political gatherings.

The army chief was responding to the arrest of four people who staged a demonstration in front of the Bangkok Art and Culture Centre (BACC) on Saturday.

The group, called Phonlamuang To Klap (Resistant Citizens), organised a mock election to commemorate the poll on Feb 2 last year, which was obstructed by anti-government protesters and was later nullified by the Constitution Court.

Four members of the group were arrested and charged with violating the National Council for Peace and Order's seventh order, which bans political gatherings of more than five people. All denied the charges and were released on bail.

According to Reuters, the group included student protesters describing themselves as the "last group standing", while claiming they will openly defy what one leader called a tyrannical regime. The include current and recent students.

The news agency said the young members call their group the Thai Student Centre for Democracy (TSCD), and are a mixed group, politically. Some claim to support the red shirt movement loyal to ousted prime minister Yingluck Shinawatra, while others sympathise with the establishment that supports the junta.

Siriwit Serithiwat, a student at Thammasat University, was among those detained. He told Reuters he was accused of violating the martial law ban on public gatherings of more than five people. He was told he also violated the conditions of a document he was forced to sign last year promising not to participate in political activities.

He was released from nearly 12 hours in police custody and had to pay bail of 40,000 baht. He expects to face trial in a military court, he told Reuters.

Gen Udomdej insisted it was police officers, not military officers, who arrested the demonstrators at the BACC.

But he said "state officials" had warned demonstrators several times about staging protests against the coup and engaging in activities that go against martial law.

People are allowed to express their views and take part in "positive" activities, as long as they are within the law, he said.

"I think most people prefer peace and order in our country. It is only small groups that carry out unlawful activities," Gen Udomdej said.

State officers have urged people to understand the necessity of the coup, which was staged to maintain order. Gen Udomdej urged people not to hold any more political gatherings.

TSCD members told the Reuters reporter they are prepared to go to jail to see a return to democratic rule. "We are the last group standing," group member Than Rittiphan, 22, told Reuters.

The students say growing disgruntlement over the economy means Thailand is ripe for a new wave of protest. "People are starting to get sick of this tyrannical regime, especially how they manage the economy," Mr Than told the news agency.

He has dropped out of university and has not returned home for weeks so the army will not know where he lives.

Student Songtham Kaewpanpruek likened the current wave of activism to a 1973 uprising and 1976 army crackdown on a left-wing student protest amid lynchings, beatings and shootings. Officially, at least 46 protesters died, pulling the country back to years of military rule.

Mr Songtham's aunt and uncle were student activists at Thammasat University, a hotbed of political activity in the 1970s.

"We're taking the baton from the generation of '76," said Songtham, who said he had not slept at home in weeks to avoid the army knowing his whereabouts.

"There are some teachers supporting us but because of martial law, many aren't able to reveal their identity."

Gen Udomdej declined to comment when asked about concern from the European Union over use of military courts against civilians.

The EU delegation to Thailand said that as a state party to the International Covenant on Civil and Political Rights, the kingdom must bring suspects before a judge.

"As a friend of Thailand, the EU has repeatedly called for the democratic process to be restored and for martial law to be lifted," it said. 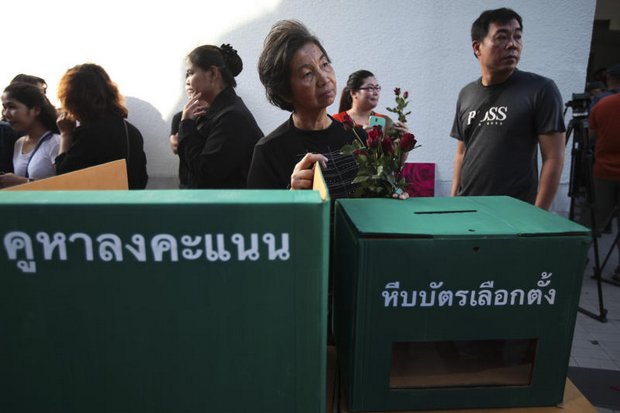 Anti-coup activists staged a mock "election" last Saturday to protest continuing military rule, but their demonstration was quickly broken up and four protesters were arrested.