A 380-metre-long bridge pier, illegally encroaching into the sea, was built by Rayong Resort, a luxury resort hotel in eastern Rayong province. (Photo by Jumpol Nikomrak)

National park authorities have given the Rayong Resort hotel 30 days to demolish its 380-metre-long bridge pier, which was found to have illegally extended out over the sea. 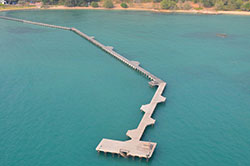 The Department of National Parks, Wildlife and Plant Conservation has asked the operator of Rayong Resort Hotel to dismantle its bridge pier within 30 days as it illegally encroached onto the sea. (Photo by Jumpol Nikomrak)

Sumet Saithong, head of the Khao Laem Ya-Mu Ko Samet National Park in Rayong, said on Tuesday the resort hotel had built the bridge pier, 380 metres in length, in 1985.

However, an investigation found the operator had sought permission only from the Marine Department at the time to build a 110-metre-long bridge pier. No permission had been sought from the Royal Forestry Department or the Department of the National Parks, Wildlife and Plant Conservation, said Mr Sumet.

The department found the pier had illegally encroached over the sea and issued a notice on Nov 3 asking the operator to explain the matter.

However, the hotel failed to clarify the issue within the deadline.

The department had now sent a letter asking the hotel to dismantle its pier within 30 days. If not, national park authorities will demolish it.

Mr Sumet said a budget would be allocated by the department for the demolition and then a civil suit filed against the hotel operator asking that it refund the cost. 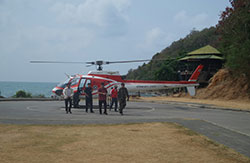