The Year of the Goat begins Thursday on the lunar calendar, with plenty of festivities featuring parades, parties and banquets - without incense or gold in the food. (Photo by Patipat Janthong)

According to Public Health Minister Rajata Rajatanavin, the risk is in using incense sticks in food and consuming it afterwards, thereby ingesting lethal substances including lead, mercury, arsenic and chromium.

Symptoms of heavy metal poisoning include nausea and diarrhoea shortly after consuming the contaminated food, and it carries the long-term risk of cancer, Dr Rajata warned.

In the weeks leading up to the Chinese New Year, the Public Health Ministry has been promoting a food safety campaign to safeguard people's health.

A study by the Chulalongkorn Clinical Research Center found that burning gold and silver joss papers during festivals can contribute to Parkinson's disease among the elderly and slow child development. 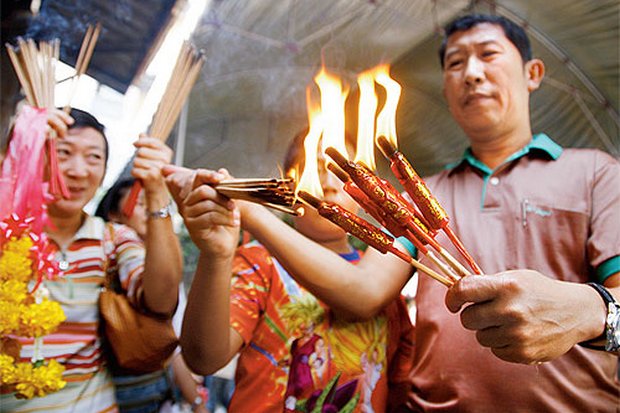 Burning incense to keep away bad luck is okay, says the holiday bulletin from the Public Health Ministry - but putting the ashes in your food, as tradition dictates, can create very bad luck indeed. (Photo by Yingyong Un-anongrak)

Symptoms caused by lead poisoning range from vertigo to seizures, noted the director-general of the Department of Health, Pornthep Siriwanarangsan.

While the smoke from burning paper coated in gold and silver is toxic due to traces of chromium and nickel, the ash is also hazardous.

The ash from burned joss papers leave 30 to 60 times more heavy metal traces in the atmosphere than regular dust, and need to be disposed of efficiently, Dr Pornthep said.

"We cannot just throw it in the rubbish, but should instead follow a procedure similar to that of a factory," he explained.

Meanwhile, Dr Manoon suggested that city municipalities work to regulate incense and paper burning during new year festivals. The other solution would be for the Ministry of Industry to control the production of festive items so they do not carry the risk of heavy metal poisoning, he said. 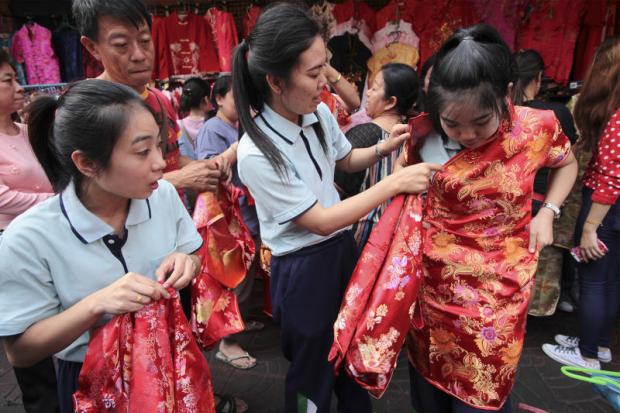 A woman tries on a dress with the help of a colleague while going shopping in the Yaowarat area, Bangkok's Chinatown. Buying new clothes is one of the traditions to celebrate Chinese New Year. Patipat Janthong