A car bomb is on fire after it was detonated by separatist militants in Narathiwat's Muang distirct on Friday. (AFP photo)

Car and motorcycle bombings in Narathiwat province on Friday injured 13 and damaged 20 buildings in Muang district.

A third bomb attempt failed when someone threw a dud grenade at a restaurant on the road leading to Yi-ngo district. It did not explode and ordnance-disposal officers collected and destroyed it.

The first explosion came from a pickup truck stuffed with explosives parked outside a restaurant on the main road near the Isuzu showroom intersection at 1.06pm, said Pol Lt Gen Anurut Kritsanakaraket, commander of the Southern Border Provinces Police Operation Centre.

They said the bomb was detonated by radio while the employees of the car company were out to launch. About 20 food shops and a karaoke bar were damaged by the powerful blast. Torn corrugated roofing, electrical wires, shattered glass and the charred shell of the car littered the street as police secured the area, according to an AFP witness.

Police source said the pickup truck used was stolen from Songkhla province and also was in a shooting incident in Pattani’s Khok Pho district about a month ago.

Permanent secretary for public health Narong Sahametapat said there were no fatalities, but the ministry received report that 13 were injured. Four were seriously hurt while the rest suffered only minor injuries. All are in stable condition or have been released.

Authorities detonated the second bomb placed inside a motorcycle 46 minutes later in front of the Guan Yin shrine on Na Nakhon Road in tambon Bang Nak at about 1.50pm, about 300 metres from the scene of the first blast. There were no injuries from the controlled explosion.

"The attackers wanted to lure police to the site before hitting us with another bomb," southern police commander Anurut Kritsakaraket told AFP.

Just prior to the bombings, Narathiwat governor Natthapong Sirichana had Friday handed out a total of 15 million baht in compensation to 52 people affected by earlier violence in the province. 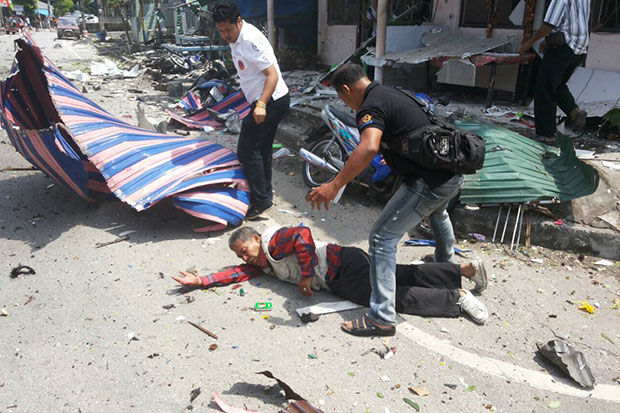 A photographer comes to the aid of one of 13 people injured by a car bomb in Narathiwat’s Muang district on Friday.