Quest for unity leaves its mark

Unlike 1997 and 2007, national reconciliation is the driving force of new constitution, writes Mongkol Bangprapa

As the country moves closer to the promulgation of its 20th charter, national reconciliation has been the central theme of the drafting process, spurring reflection about the social and political motivations behind the two previous constitutions in which public participation played a large role. 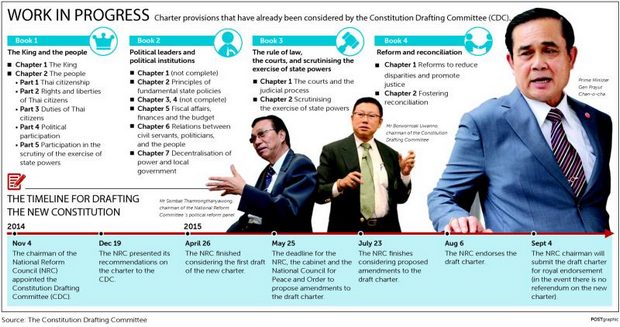 The driving forces behind the two previous constitutions of 1997 and 2007 range from people's thirst to have a say in the drafting of the country's supreme law to the public desire to combat increasingly discreet forms of corruption.

The forthcoming charter and the previous two share a common feature: they all followed coups. But the social and political contexts and circumstances that influenced the last two seem to be absent from the current process.

The 1997 constitution was introduced by the Banharn Silpa-archa government, which was formed after the now-dissolved Chart Thai Party won the majority of House seats in the 1995 general election.

The 1997 charter followed the 1991 military coup staged by the National Peace Keeping Council (NPKC) that toppled the government of Chatichai Choonhavan.

At the time, people were frustrated that the coup-makers seized power and then failed to address corruption. Instead, the NPKC worked in league with politicians to form a government led by Gen Suchinda Kraprayoon, a key member of the NPKC, as prime minister.

That led to the Black May 1992 mass uprising in which demonstrators, who were demanding a return to democratic rule and an elected prime minister, were crushed in a military crackdown that left several dead and injured.

When completed, the draft of the 1997 charter was submitted for endorsement by the parliament at the time.

Calls for political reform were so vocal and vigorous that several politicians, who were unhappy with provisions in the 1997 charter that curtailed their power and benefits, had to endorse it.

The provisions that upset the politicians included those that prohibited them from being involved in state concessions. Under the 1997 charter, several independent organisations were also created for the first time to scrutinise political office-holders.

The 1997 charter was billed as "the People's Constitution" because it was the first time the public had participated in the charter-drafting process. All previous charters were initiated by military governments.

The 1997 charter was abrogated by the military who staged the coup to oust Thaksin Shinawatra on Sept 19, 2006.

The circumstances prior to the 2006 coup included political polarisation and fierce rivalry between the Thai Rak Thai Party (TRT) under Thaksin Shinawatra and the Democrat Party led by Abhisit Vejjajiva, plus the rise of a new pressure group: the yellow-shirt People's Alliance for Democracy.

Also, the allegations of deep-rooted policy-oriented corruption — where stated policies were written and designed with leeway through which political office-holders received undue benefits from exercising state power and managing state projects — were rife, driving people from many quarters to support the popular movement pushing for the people's charter.

Although the TRT was later dissolved over an election law violation in 2007, the party's popularity remained high, and anti-coup sentiments lingered. Coup critics also campaigned against the draft of the 2007 charter, sponsored by the coupmakers.

The process of drafting the 2007 charter saw charter drafters trying to design measures to prevent politicians' influence in the charter-drafting process.

The 2007 Constitution Drafting Assembly had 100 members, who selected 25 drafters who actually did the charter writing. Another 10 drafters were picked by the Council for National Security.

The 100 assembly members came from a pool of people nominated by various professions.

Drafters of the 2007 charter also retained the 1997 charter's provisions relating to party dissolution and the ban on executives of the dissolved political parties.

A referendum was also held on the 2007 charter to ensure the charter was not amended too easily.

For the new constitution, if the charter-drafting process is completed on schedule, it is expected to be promulgated next year.

After the military led by Gen Prayut Chan-o-cha staged the coup to oust the Yingluck Shinawatra on May 22, last year, the 250-member National Reform Council was set up under the interim constitution to push for reforms.

ฺBefore the May 22 coup, the country was in the throes of social and political conflicts, with the confrontation between two opposing political groups: the People's Democratic Reform Committee and the United Front for Democracy against Dictatorship.

Demonstrations by those who supported the Yingluck Shinawatra government and those by anti-government groups, as well as violent incidents launched to attack the political opponents, threatened to bring the country to its knees, prompting the military to step in. Consequently, national reform and reconciliation are the major themes of the new constitution.