The National Council for Peace and Order (NCPO) and the government denied Monday they had anything to do with the alleged disappearance of a key witness in the deaths of six red-shirt demonstrators at Wat Pathum Wanaram in May 2010.

The denial came after netizens claimed on social media that Nattatida Meewangpla, who worked as a volunteer medic during the 2010 military crackdown, was taken from her house in Samut Prakan by military officers on Saturday and has not been heard from since. 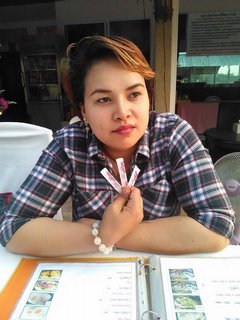 Disappeared in broad daylight: A key witness to the 2010 Wat Pathum Wanaram killings, Nattatida was taken by men in uniform. (Bangkok Post photo)

Broadcaster Peace TV also picked up the report about Ms Nattatida's alleged disappearance and published it on its Facebook page.

NCPO spokesman Col Winthai Suwaree said Monday the council had checked with several agencies and confirmed that no military officers were sent to detain Ms Nattatida.

"We are afraid some people might have tried to make it appear as though the military was involved in Ms Nattatida's disappearance," he said.

Col Winthai insisted authorities are required to strictly follow procedures and regulations when they invite individuals for meetings.

Despite this, Winyat Chartmontree, a red-shirt lawyer, called on the military to release Ms Nattatida immediately.

He claimed two soldiers in uniform and three plainclothes officers showed up at Ms Nattatida's house on Saturday and took her away.

These officers did not have a warrant and claimed to be acting under martial law, which allows the military to detain a person without charge for up to seven days.

“The military can’t claim they have no knowledge about Nattatida. There are witnesses who saw several military personnel as part of the arrest team,” Mr Winyat said.

Her family members have not heard from her and do not know of her whereabouts, he said.

Ms Nattatida is a key witness in the Wat Pathum Wanaram shooting during the crackdown on red-shirt protesters that left six dead, including volunteer medic Kamolkade Akkahad, on May 19, 2010.

Ms Nattatida told the court three years ago she was working with Kamolkade and other volunteer medics about 4pm when she heard the sound of gunfire from Chalermpao intersection.

Tear gas was thrown from behind the temple. Several people with gunshot wounds were taken to the medical tent.

Bullets hit the soil about five metres in front of the tent and Ms Nattatida told everyone to duck. She noticed Kamolkade had been injured and then became still.

BLM: The Founders of WCTL Speak About the Rise of Hate Crimes Against Minorities