Prime Minister Prayut Chan-o-cha has threatened to severely punish journalists following media reports of a conflict between two top ministers and on human trafficking in Thailand.

Speaking before his flight to Brunei yesterday, Gen Prayut reminded reporters he still has powers under the National Council for Peace and Order (NCPO) to deal with them. He also sarcastically said "execution" was a possibility when challenged how he intended to deal with them. 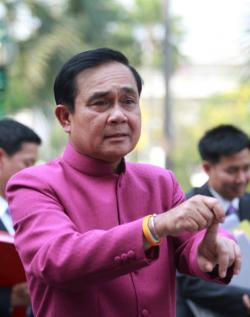 Prayut: No cabinet rifts or reshuffle

The premier denied media reports of a rift between cabinet ministers after a meeting on Tuesday with his two deputies, Gen Prawit Wongsuwon and MR Pridiyathorn Devakula. He also refuted speculation about a cabinet reshuffle.

"It's only you [media] who talk about a reshuffle. Tell me if a reshuffle will improve anything under these circumstances?" he asked.

"If newspapers want to boost sales, so a reporter or editor must quit, will this help? Solving a problem is not that easy," Gen Prayut said.

"We already gave you freedom of speech and do not restrict you. No one else ever did that for you. I'll wait and see how the media works ... From now on, I will monitor all media and if necessary, I will use my power," he said.

"The orders by the NCPO still stand. Don't you forget it," he said.

When asked how he would shut the media up, Gen Prayut said: "Execution, perhaps? Don't ask silly questions. The media only needs to be careful, and stick to ethics."

Gen Prayut also criticised Thapanee Ietsrichai, a Channel 3 field reporter, who conducted an investigative report on jails and graveyards of fishermen on Indonesia's Benjina Island. Up to 500 of the fishermen are Thai citizens.

"We have been helping [the fishermen]. So far we've helped 26. But reporters should not elaborate on this problem. You need to consider the damage it does to the nation," he said.

"Past governments never touched this issue but we're trying to solve it.

"It is an ongoing effort. What will happen if we report this in a big way, telling the world about our trafficking and illegal fishing problems?

"What if they stop buying fish worth 200 billion baht from us? Will you take responsibility?" he said.

"I tell you Thapanee. Come see our officers. What good does it do to talk on the outside? You don't take responsibility for anything. You only demand rights and freedom," Gen Prayut said.