A drug suspect found beaten and hanged at a police safehouse in Songkhla province died of suffocation, autopsy results showed.

Deputy national police chief Jakthip Chaijinda said Tuesday that Teerapat Saereekiatdilok's time of death also was close to the time he sustained four broken ribs and a lung laceration, according to medical examiners at Songklanagarind Hospital. 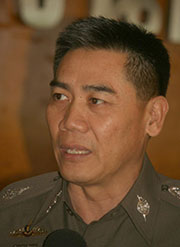 Teerapat was found hanging from a belt and curtain tied to a bedroom window's security grating at the house in Hat Yai district March 9, two days after he was arrested for allegedly possessing illicit drugs. The place reportedly served as a safehouse for an anti-narcotics police unit in the district.

Police claimed Teerapat committed suicide to avoid imprisonment. But Teerapat's faher, Somchai, suspected his son was beaten to death by the officers who arrested him.

He said Teerapat was released from jail on a drug-related offence in March last year and was on probation. The officers allegedly contacted him a day after Teerapat's arrest and demanded a million baht for his son's release. Both sides later settled on a payment of 300,000 baht.

Pol Gen Jakthip, who is leading the investigation into the death of the 33-year-old alleged drug user, said his team questioned Teerapat's parents and 10 narcotics officers.  He noted that an officer who guarded the safehouse admitted to taking part in Teerapat's assault, but declined to provide further details as the inquiry is ongoing.

Investigators will examine the accused policemen's mobile phone and question more witnesses. The investigation was expected to wrap in a few days, said the deputy police chief.

Meanwhile, Mr Somchai asked Khunying Porntip Rojanasunan, director-general of the Central Institute of Forensic Science, to examine Teerapat's second autopsy report by Songklanagarind Hospital. He said he still had suspicions about the cause of his son's death.