Labour rights groups have called on the United Nations (UN) to investigate and sanction diplomats who misbehave and to strengthen the UN internal code of conduct regulating officials’ behaviour. 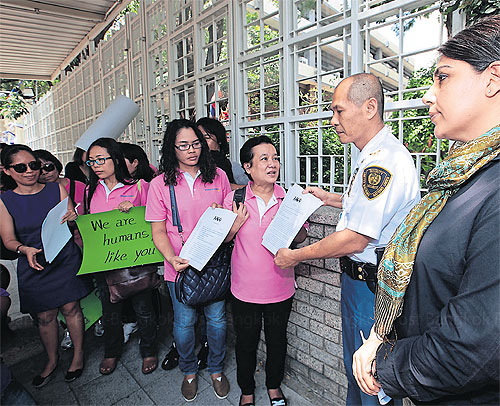 Labour rights groups submit an open letter to the United Nations, urging it to investigate and sanction misconduct by diplomats. P(Photo by Pawat Laopaisarntaksin)

The group, led by Preeda Tongchumnum, the Human Rights and Development Foundation's labour rights coordinator, and Homenet Thailand representative Juntana Ek-euamanee, submitted an open letter to the World Health Organisation (WHO) on Friday, following allegations that its representative to Thailand, Yonas Tegegn, an Ethiopian national, treated his former housemaid like a slave. His former housemaid, also an Ethiopian national, filed a complaint to the Thailand Lawyers Council last month, prompting the WHO to conduct an internal investigation.

WHO spokesperson Dr Mukta Sharma, who received the letter, said the organisation takes these allegations very seriously and will review them according to its internal procedures.

Asking that justice be served, labour rights advocates called for the UN to apply its code of conduct to the internal probe, adding that the investigation process must be transparent and could itself be subject to scrutiny.

They demanded that the Labour Ministry protect employees and the Ministry of Social Development and Human Security give assistance to workers who suffer abuse from their employers.

The representatives said that identification details of housemaids aged between 15 and 18 should be reported to authorities, to combat cases of child labour. Apart from the name and age of the worker, the employer should submit their working hours and the type of tasks demanded.

House workers should be able to decide if they want to stay in the employer’s house to retain their freedom of movement. Authorities competent in the protection of labour rights should be allowed to come in to contact with the employee as well.

In their petition, rights advocates also called for Thailand to ratify the International Labour Organisation’s Domestic Workers Convention, to strengthen the protection of workers’ rights and safeguard them in case of abuse, detention and other kinds of violence.

According to Ms Preeda, there are over 300,000 housemaids in Thailand including migrant workers.

Dr Tegegn answered the telephone on Friday but he refused to comment.