Gen Prime Minister Prayut Chan-o-cha says it is up to Europe "to show us some mercy" over the demand that Thailand clean up everything from Trat fish-packing (above) to illegal trawling. (Photo by Apichart Jinakul)

Prime Minister Prayut Chan-o-cha pleaded for sympathy from the European Union (EU) over its ultimatum to clean up the illegal, unreported and unregulated (IUU) fishing industry in Thailand.

"Everything is up to the EU and no matter how hard we try, if they don't give their approval we cannot do anything about that," he said Thursday, responding to a question about whether his order to set up the Command Centre for Combatting Illegal Fishing (CCCIF) will be sufficient to tackle the fishing problems.

"Of course, we've been wrong about this matter for a long time. So, it's up to it [the EU] to show us some mercy. It is a world organisation that only maintains a single standard and since we've breached its standard, we have to accept the mistake," Gen Prayut said.

The EU has yellow-carded Thailand and given the country six months to solve the IUU problems plaguing the industry.

It is now crucial for the country to try its very best to avoid a red card which would involve a EU ban on Thai fishery product imports, said the prime minister, who admitted that he could not guarantee if the problem will be resolved in six months as demanded by the EU. 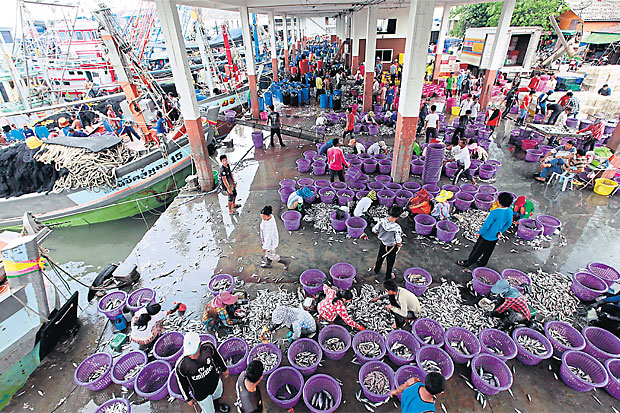 Workers sort fish into baskets at a wharf in Trat yesterday. The government has intensified measures to curb problems in the fishing industry after the European Union issued a yellow card giving the government six months to stamp out illegal, unreported and unregulated fishing. APICHART JINAKUL

He added that it could be up to a year because he has exercised his powers under Section 44 of the interim charter to resolve other key problems involving human trafficking and civil aviation.

His remarks came one day after his order to set up the CCCIF was published in the Royal Gazette. The centre will report directly to the premier from today, with the navy chief in charge of it.

The order states that if no serious action is taken to clean up the fishing industry quickly, it may result in Thailand's fishery export sector being hit hard.

Another important task is to closely monitor and combat illegal fishing activities.

Foreign Minister Tanasak Patimapragorn said that concerning the United States' annual Trafficking in Persons (TIP) Report 2014 which placed Thailand in the lowest Tier 3 level, he has asked the US to give advice on how Thailand can deal with the problem but to no avail.

"I have also invited the US experts to coordinate with us in order to deal with human trafficking problems about 10 times, but [we have been informed] they have got a lot of work to do so no one has come to help us yet," he said.