The dog which saved the life of a newborn baby girl. (Photo by Pattanapong Hirunard)

A stray dog has saved a baby girl abandoned next to a rubbish bin at a housing estate in Chon Buri’s Muang district, witnesses said.

The dog's act of heroism occurred in front of a house in Pattana Villa housing estate. Noi Phongsakorn, 63, a witness, said he saw two stray dogs fighting over something that looked like a doll near a rubbish bin in front of the estate on his way to a market on Sunday night.

“At first I thought they were fighting over a doll, but I was shocked when I heard a baby crying,” Mr Noi said. “It was a baby girl,” he said.

He said a stray female dog, called Nom Sod (fresh milk) by residents, tried to save the baby from the fighting animals.

The dog picked the baby up in its mouth and carried her 10 metres from the other dogs.

Mr Noi informed a rescue foundation to help the baby who had been bitten several times. Chon Buri police said security camera footage showed a woman thought to be the child's mother near the area where Mr Noi spotted the infant.

The popular story has brought hundreds of online comments.

“What a shame! Irresponsible parents dumping their own baby. But a dog tried to save her," Aekkaphot Saelo posted. 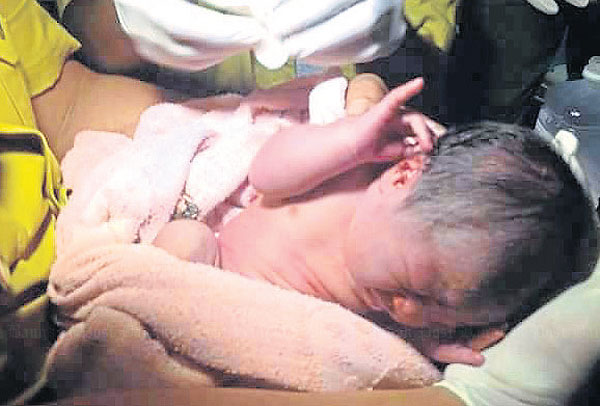 An infant weighing 2kg is given first-aid by rescuers. Ruamkatanyu News