Police find 30 more graves in Hat Yai district, Songkhla, believed to be linked to the smuggling of illegal Rohingya through Thailand to Malaysia. (Photo by Wichayant Boonchote)

The graveyard is at Ban Chalung village in tambon Chalung, Hat Yai. Villagers said it had been unused for nearly 40 years and there had previously been only six old graves. They told police the 30 new graves had been there for about a year.

Officials said the graves were similar to the 26 graves found at a Rohingya detention camp in a forest in Padang Besar sub-district of Songkhla's Sadao district last week. The area where the graves were found had been a venue for a big camp that had held Rohingya migrants.

Police said the 30 graves had not yet been opened for examination.

Police also found an old detention camp at a rubber plantation in nearby Ban Khlong Tor in Songkhla's Rattaphum district on Thursday. They believed the deserted camp functioned as a rest area  for Rohingya being smuggled from Satun province to Sadao, where they crossed the border to Malaysia.

Police on Thursday also found 13 Rohingya migrants walking along the edge of a forest on Khao Kaew mountain in Padang Besar sub-district and took them in for questioning.

The group said traffickers had abandoned them in the jungle. Earlier they had traveled from Myanmar by sea to Satun with 17 other compatriots. They were told they were walking across the border into Malaysia, but their guides suddenly deserted them. The 17 others were found on Wednesday. (continued below) 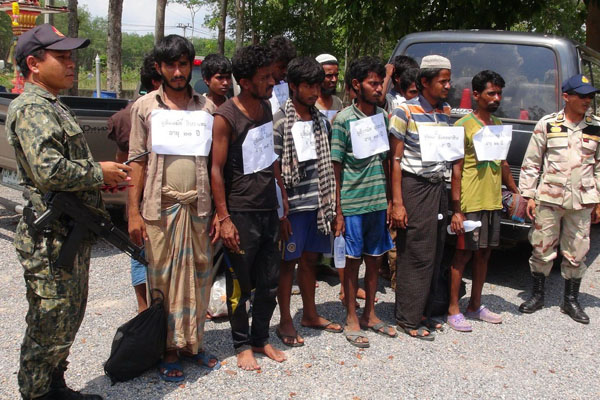 Officials label the 13 illegal Rohingya migrants found walking on the edge of a forest near the Malaysian border in Padang Besar sub-district, Songkhla, on Thursday. (Photo by Wichayant Boonchote)

The discovery of additional graves and detention shelters followed the transfer of dozens of southern police officers to pave the way for an extended investigation into human trafficking in the region.

Police have warrants issued for the arrest of 18 people allegedly involved in Rohingya trafficking in Songkhla.

He also ordered the Department of Special Investigation to launch an inquiry into the trafficking in parallel with the police investigation.