KANCHANABURI — A tiger that mauled the abbot of the province’s renowned “Tiger Temple” inflicted only “little scratches”, the monk’s doctor said, noting most 64-year-old’s injuries resulted from him falling.

Dr Sahathep Sawarngnet, director of Thanakarn Hospital, said Monday that Phra Vissuthisaradhera, better known as Luangta Chan, suffered a broken right wrist, broken upper front tooth and swelling and bleeding in the mouth in the Saturday incident. The monk also sustained scratches to his left side of the face, near his forehead.

Dr Sahathep did not say if Luangta Chan required three stiches to the cheek near his upper lip, as a result of the tiger's attack, as the monk's disciples claimed earlier.

Luangta Chan was actually physically fit, the doctor said. But he bled a lot after the tiger attacked him because he had been taking aspirin to prevent a heart attack, which resulted in his blood clotting slowly.

The medical team refused visitors because they feared visitors could pose an infection risk to the elderly monk.

Dr Sahathep claimed most of the abbot's injuries occurred when he slipped and fell. Only the scratches on his face came from the tiger.

Luangta Chan's wrist was placed in a cast and he is undergoing physical therapy. He added the abbot was in good condition and is expected to be released from hospital in about a week.

Luangta Chan, was walking Hern Fa, a male Bengal tiger about seven years old, on Saturday afternoon when he accidentally slipped and fell to the ground, jerking the big cat's leash. That startled the tiger and caused it to maul the monk's face, according to Dr Sahathep and Luangta Chan's disciples.

The hospital director's remarks came amidst scepticism about the actual cause of the tiger's attack and extent of the monk's injuries. A photo showing blood-soaked Luangta Chan was posted online a day after the incident. 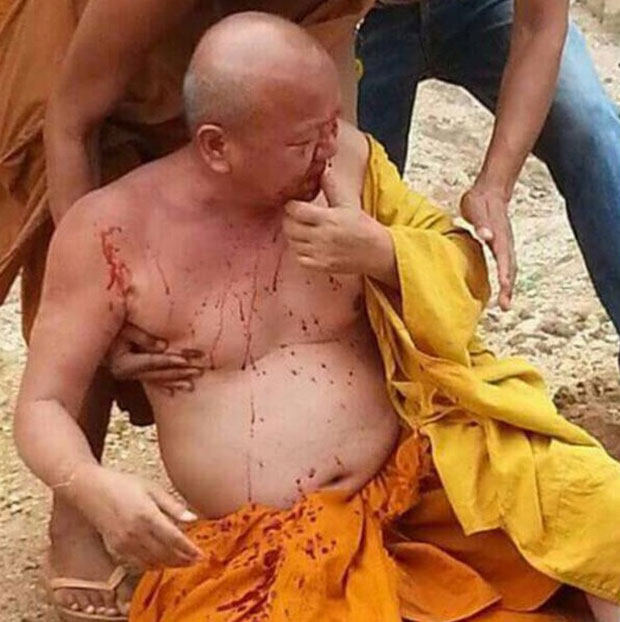 A photo taken by a temple visitor and posted online shows Luangta Chan's injuries after he was attacked by a tiger born and reared at the Tiger Temple.