A police officer inspect the crash scene in Lampang's Muang district in the morning rush hours of May 27. (Photo by Aswin Wongnorkaew)

Three persons were killed and 29 others, including seven students, were hurt when a Chiang Mai-bound tour bus slammed into a school van, another vehicle and three houses in Lampang province early today.

The bus travelling from Udon Thani to Chiang Mai crashed head-on into the school van and a passenger sedan stopped at a red light at Den Chai intersection in tambon Phabat of Muang district, said Pol Maj Kamol Khid-arn, a duty officer at Muang police station, who was alerted around 6.30am on Wednesday.

Police and rescue workers arrived after the Jakkapong Tour Co bus ploughed into a wall of a nearby house. Two other houses also were damaged.

Three persons whose name had yet to be identified were killed and 29 other people, including the bus driver and bus passengers, were injured and rushed to a nearby hospital. One of the persons killed in the accident was identified by police as Pham Van Dong, a Vietnamese national.

The incident blocked the road and resulted in heavy traffic congestion for several kilometres.

Yuphin Khamnu, a bus conductor, told police that the brakes failed near the intersection. Her husband, bus driver Sompornphet Khamnu, shouted for all the passengers to move to the back of the coach before he lost control, colliding with a road divider and ramming the two vehicles and three houses. 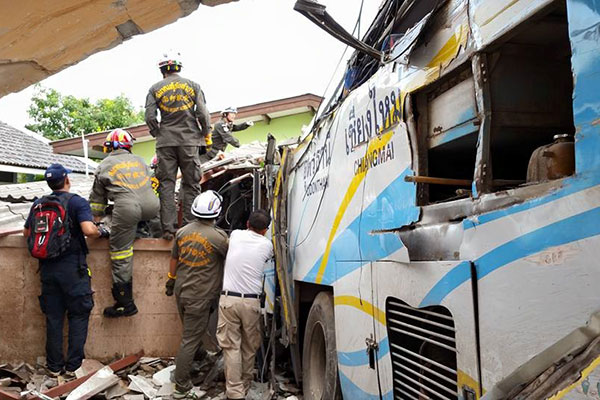