Prachuap Khiri Khan is working to restore Bueng Bua Sam Roi Yot, the province’s once-famous natural-lotus swamp, after its signature plants stopped blooming as they once did.

Chaichana Sutthivorachai, Sam Roi Yot district chief, on Thursday called a meeting with community leaders and some 150 shrimp farmers to work out measures to resolve problems with Bueng Bua Sam Roi Yot as well as a large freshwater marsh nearby.

In the past, lotus plants in the 500-rai swamp blossomed year-round, making it a popular tourist attraction. Plentiful lotus flowers in full bloom drew many tourists to the district, said Mr Chaichana.

But the lotus plants haven't fully bloomed in 10 years, resulting in a sharp drop in the number of tourists, he added.

Officials checked the water quality and found the percentage of saltwater had grown above normal, said the district chief. Authorities suspect the saltwater has affected plant growth, causing them not to bloom.

Mr Chaichana said he earlier had sought cooperation from shrimp farmers in the district to reduce the salinity of their farm pools to five parts per thousand for six months before releasing their water into local water sources to determine whether the salt truly was affecting plant growth.

Soil fertility in the swamp would also be tested.

He said local officials and residents would conduct a six-month test to find a suitable method of lotus planting. A test farm would attempt to grow lotuses both with and without fertiliser.

He believed the swamp would be rejuvinated soon and its signature lotus flowers would become a magnet for tourists again. 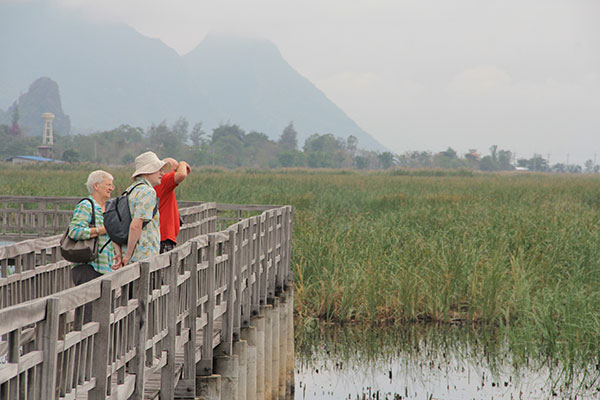