Gaggan is set in a colonial-style house humbly tucked away in a small, residential alley off ritzy Soi Lang Suan in Bangkok.(Bangkok Post photo)

Two Thailand restaurants rank among the best 25 in the world, with Bangkok’s progressive-Indian sensation Gaggan making the top 10 for the first time at awards handed out last night in London.

Moving up to tenth place from 17, current Asia's Best Restaurants winner Gaggan was joined in the prestigious World's 50 Best Restaurants rankings by another former Asian winner, Nahm, at No. 22. Its menu of modern twists on traditional Thai favourites moved up from 32nd place last year.

This year's contest, run by British media company William Reed since 2002, crowned Spain's El Celler de Can Roca as the world's best restaurant with the "collective genius" of the three brothers who run it earning plaudits.

"This is a restaurant that has never forgotten its humble roots, its sense of familial warmth, or the need to serve remarkably delicious dishes and outstanding wines," a statement from Restaurant magazine, which publishes the awards, said.

It was the second time the Girona eatery has topped the list, after taking the No. 1 spot in 2013. The restaurant knocked Danish four-time winner Noma down to third place, with Italy's "Osteria Francescana" taking the second spot.

The top 10 was rounded out by restaurants in Peru, the United States, Spain, Britain, Japan, Brazil and Thailand's Gaggan. 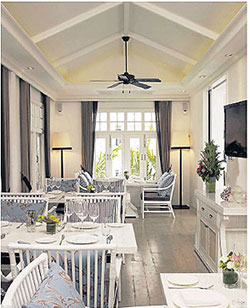 The Bangkok brainchild of Indian-born Gaggan Anand "continues to impress" and "quite rightly skyrocketed" since winning the Asian prize, our Bangkok Post review said in April.

Located on Soi Lang Suan, Gaggan describes its cuisine as progressive Indian and preciously was cited for its "contemporary techniques" and "playful" dishes.

"Gaggan reinvents regional Indian cuisine using modernist cooking methods. The approach is playful, adventurous and thought-provoking with classic street dishes deconstructed and reinterpreted without losing what made them special in the first place," Restaurant magazine said it its award review. "It's a clever balancing act that clearly draws on skills and techniques acquired by the chef during an internship with Ferran Adrià's research team in Spain."

Nahm, meanwhile, has continued to ascend in world rankings over the past two years. 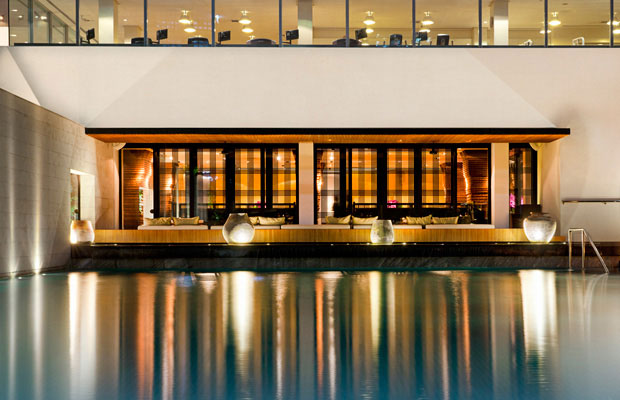 Located on Sathon Road, Nahm was opened in 2010 by Australian chef David Thompson and his kitchen partner, chef Thongsak Yordwai. The menu celebrates the bold flavours of authentic Thai cuisine through a respectful interpretation of century-old recipes.

"David Thompson hails from Australia, of course, but the Thais have embraced this farang with open arms, and the chef and food historian is now widely accepted as the world's foremost practitioner of their country's beguilingly multi-faceted cuisine," the awards website said.  "The food at Nahm draws influence from the spectrum of Thai cooking; from the opulent gastronomy of the palaces right through to the dishes of the street."

The Best Restaurants awards have become a reference point for the world's foodies but were hit by allegations this year of cosy deals between restaurants and jury members. Criticism has focused on the methodology used to select the best restaurants.

The jury is made up of 972 "independent experts" including food writers, chefs, restaurant owners and gourmets in 27 regions. Jury members choose their seven favourite restaurants where they have eaten in the past 18 months.

Critics say the system is open to abuse since the jury do not have to offer physical evidence of having actually visited any particular restaurant.

Yet organisers hired the Deloitte consultancy firm to oversee the voting, and say jury members cannot vote on restaurants in which they have an interest. 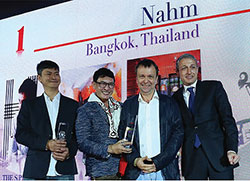 Nevertheless an Internet petition against the competition amassed more than 350 signatures, including those of France's Joel Robuchon and Italy's Giancarlo Perbellini, calling for sponsors to boycott the "opaque" awards.

"The jury members, appointed by backroom politics, vote anonymously, without ever having to justify their choice of a restaurant or even to prove that they actually ate there!" the petition read.

The bulk of the complaints against the contest comes from France, which failed to make it into the top 10 for the past two years and has never managed to win first prize.

To respond to the criticism, a team from 50 Best travelled to Paris last month on a charm offensive.

"We are sometimes portrayed as anti-French in France. We wanted to show that that is very far from the truth," William Drew, editor-in-chief of World's 50 Best Restaurants, said at a press conference in Paris.

The award has been claimed five times by Ferran Adria's El Bulli in Spain, which has since closed, and four times by Rene Redzepi's Noma, housed in a former warehouse in Copenhagen.

The awards also have regional editions, with a 50 Best for Asia and one for Latin America.