The four rubber plantations razed were encroaching on 1.9 square kilometres of forest reserve around Ban Tor Ruea village in Wang Thong district. About 900 soldiers and forest-protection officers were deployed Monday.

The encroached reserve sits in the Wang Thong river basin of Wang Nok An sub-district. Adjacent to the area stands a huge rubber plantation covering nearly 3,000 rai operated by a large-scale rubber grower.

Authorities plan to fell rubber trees covering a combined 57,000 rai that was originally forest reserve in Phitsanulok. The mission started on a plantation of 97 rai in Ban Khek Yai village of Ban Yaeng sub-district in Nakhon Thai district on June 3.

Well-connected locals had expanded their rubber plantations into the protected forest and used poor villagers to maintain them, alleged Maj Gen Ronarong Khotedamrong, deputy director for coordination of the Internal Security Operations Command, which led the tree-cutting operation.

The rubber-tree eradication programme would be accelerated to restore national forests, he said. 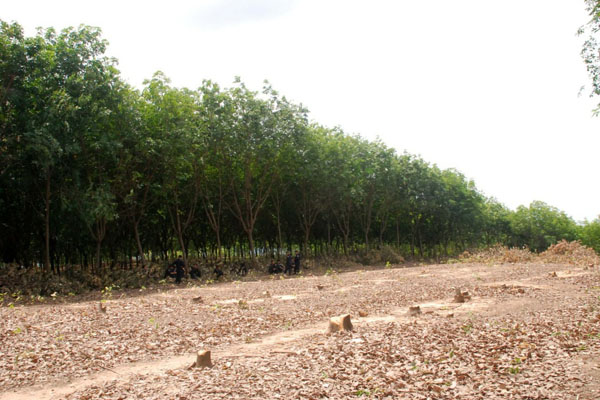 The forest-restoration mission takes out 60% of rubber trees to protect the environment. (Photo by Chinnawat Singha)

To preserve the natural environment, three adjacent rows of trees will be cut down out of every five. The result will see 60% of the trees removed.

He added that the National Council for Peace and Order is targeting the influential people behind the illegal plantations and would protect exploited villagers.

Atthapol Charoenshunsa, director of the Forest Protection and Fire Control Bureau of the Royal Forest Department, said authorities would raze about 1.5 million rai of illegal rubber plantations nationwide and 400,000 rai would be done this year.

Offenders would be prosecuted and have their assets seized, he vowed.