Many of the government's actions in combating human trafficking which occurred after March this year are unlikely to be considered by the United States in its Trafficking in Persons (TIP) report to be released early next month.

This means it is likely that Thailand's placement could remain at the lowest rank of Tier 3.

Although Thai and US officials have been in discussions over human trafficking and the TIP recommendations since the country was downgraded in June last year, Thai officials say the cut-off date has not changed.

Prime Minister Prayut Chan-o-cha has said the country will continue to do its best to deal with human trafficking regardless. He also hopes current efforts will move Thailand closer towards international standards.

The United States recently expressed its appreciation to Thai authorities for their progress in investigating human trafficking, especially in the South.

However, the government is concerned this will not be reflected in the next TIP report, as the cut-off date was three months ago. Diplomats are pushing the message that the US should consider Thailand as an "ally" in the trafficking fight, and send a message of support. 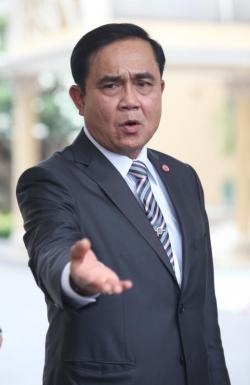 The cycle of review of the TIP report "cover efforts to combat human trafficking through to March 31, 2015, so subsequent developments are covered in next year's report", a US embassy spokesman told the Bangkok Post.

This means that the discovery of Rohingya graves and detention camps in the South and arrests of suspects, including a senior military officer, are unlikely to figure in the annual assessment.

"The report should take into account the most current information. It is unacceptable to consider action only up to March," said a Government House official involved in the anti-trafficking efforts.

"Thailand has made improvements such as passing laws, building an integrated database across agencies and focusing on catching the main players that led to the discovery of the Rohingya graves and camps," the official said.

"US officials were aware that arrests of a senior military officer and trawler owners were imminent," said the official.

One senior Thai diplomat said the country's top-down action and tangible progress on arrests and prosecutions are likely to lead to a more positive judgement for Thailand, though just when remains to be seen.

The key messages to their counterparts in the US State Department have been: the cut-off date would lead to an unfair evaluation of the government's performance, since the due process of law for trafficking offences takes time. Also, Thailand stands out as one of the most active countries in the human trafficking fight, diplomats say.

"The US should regard Thailand as a partner and ally in this anti-human trafficking campaign. It should send a positive signal of understanding, encouragement and support. By making a wise decision on Thailand's ranking in the TIP report, the US has a better chance to advance its interests in Southeast Asia," the diplomat said.

The embassy was able to offer little relief on the cut-off date, adding the US hopes the government will carry on with its fight.

"Although the reporting period has concluded, we encourage Thailand to continue its ongoing efforts," said the embassy spokesman.

The US wants Thailand to succeed in combating the human trafficking problem and each TIP report contains specific recommendations for the government to consider implementing the following year, the spokesman said.

Increasingly the TIP report focuses on actual implementation of laws, including criminal prosecution of traffickers and protection of victims.

"We consider Thailand a valued partner and ally in the fight against human trafficking. We have supported small grants to civil society organisations and work with international organisations working on trafficking issues.

"We also provide law enforcement training, support regional development projects, and pursue other activities as part of our important partnership to combat trafficking in the region.

The senior Thai diplomat said the government recognises more needs to be done to fight trafficking. "Thailand will keep up the fight because it believes it is the right thing to do," he said.