"We have to admit that we failed the test," ACM Prajin said, referring to the ICAO flagging Thailand for "significant safety concerns". "We now have to look into what should be done to address it."

The Department of Civil Aviation (DCA), which plays a key role in regulating aviation businesses and granting Air Operator Certificates (AOC), failed to meet aviation safety standards, according to the ICAO's audit of the department's performance earlier this year.

The ICAO gave a 90-day deadline for Thai authorities to tackle the problems, which ended Thursday. 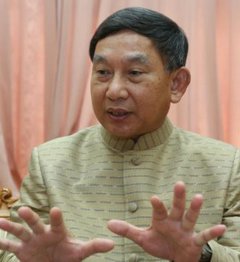 Prajin: We failed the test.

Authorities had failed to address the AOC issues within that deadline, and so they had failed the ICAO safety test, ACM Pajin said.

Prime Minister Prayut Chan-o-cha had been updated on the situation, he said.

Relevant agencies will meet on Monday and a press briefing on the issue will be held later, ACM Prajin said.

The minister said there may have been miscommunication between him and Deputy Transport Minister Arkhom Termpittayapaisith, who had reported to him that the ICAO would not publicise the audit result.

Mr Arkhom had led a ministry delegation to meet ICAO officials in Montreal, Canada, on Monday.

Commenting about possible bans on Thai-registered carriers following the red-flag announcement, ACM Prajin said this was a decision for each individual country, though most of them tend to take ICAO audits into account.

The impact was unlikely to be immediate, he said, as countries would need to make notifications of any bans in advance.

Meanwhile, the European Aviation Safety Agency (EASA) has informed Thai authorities it will make an announcement on the issue next Thursday, the minister said.

"If any countries take steps to ban us, we may not have the power to negotiate on it. We have to accept the situation and move ahead to tackle the problems."

He said plans to address the ICAO's concerns had been completed.

DCA restructuring plans will also be sent to the National Council for Peace and Order (NCPO) for approval, he said.

ACM Prajin said he had informed Thai-registered carriers to be ready for a backlash from other countries following the ICAO announcement.

He said he felt pressured by the problem but vowed to carry on trying to solve it.

Asked whether Thai officials would need to visit other countries to explain the issue, the minister said there was no immediate need until ramifications had been felt.

A DCA source said although progress had been made on tackling concerns raised by the ICAO, such as producing safety guideline manuals and recruiting more staff, the process was still incomplete, particularly the AOC issuing process, which would take more time.

It was important now to keep a close watch on the upcoming EASA announcement and the DCA audit results of the US Federal Aviation Administration (FAA) slated for July 13, the source said.

The ICAO announcement was unlikely to prompt the EASA or FAA to slap bans on Thai flights since the country's carriers maintained high standards, the source said.

Airline Operators Committee chairman Louis Moser said the ICAO audit results had been made public in line with its required procedures.

He said it was possible other aviation regulators would send people to examine DCA and Thai aviation standards.

Tassapon Bijleveld, chief executive of Thai AirAsia, denied reports that his airline was ordered to suspend flights to Japan within 15 days following the ICAO's announcement. He said the reports were unfounded and the airline's flights to Japan were still operating as normal.