Rajabhat to cut ties with SCB over 'discriminatory' job ad

The Rajabhat university network said it will terminate financial dealings with Siam Commercial Bank following publication of a staff-recruitment ad restricting applications to graduates from 14 other Thai institutions.

Although SCB had tried to rectify the situation by issuing a public statement and talking privately to schools, the Council of Rajabhat University Presidents of Thailand (Crupt) issued a statement Tuesday saying it still views SCB's job ad as discriminatory.

On June 6, SCB posted a recruitment ad on its website seeking a financial adviser trainee. One of the required qualifications was a diploma from one of 14 public and private universities, none of which were in the 40-campus Rajabhat network.

The restriction incited heated debate on social media and the bank on Sunday issued a statement saying it actually recruits employees from all universities nationwide. SCB said its approximately 22,000 staffers come from all different schools.

The bank said in the statement that it will continue to recruit financial adviser trainees from any university nationwide until the end of the year.

Crupt president Niwat Klin-Ngam told the Bangkok Post, however, that the council's decisions reflected concerns by students, alumni, parents and teachers from all schools not mentioned by the bank, not just those connected to Rajabhat.

He said it was the right of the publicly traded bank to set its own requirements, but the council wanted to urge SCB to draw from the country's entire educational system.

"Students graduating from specified faculties at any university should have equal opportunity, whether they studied at Ramkhamhaeng, Rajabhat or Rajamangala University of Technology," Mr Niwat said. "They should not be discriminated against for enrolling at the 'wrong' university."

Each of 40 Rajabhat universities will look into their dealings with SCB and some, notably Suan Sunandha Rajabhat University's assets and revenue division, already have published their stance via Facebook pages supporting the Crupt's decision.

"Though we may not have a large amount of money, it is the relationship that we have with SCB. We want to protect all students to be treated fairly," added Mr Niwat, who is also the president of Phetchaburi Rajabhat University.

On social media, most commenters denounced the bank's recruitment policies, while a few supported the restrictions, saying the bank has the right to get quality employees. Some noted that while the position of "financial adviser trainee" might sound attractive, the job was really selling insurance policies.

One commenter, identified as Nuth Apat, posted on Suan Sunandha's Facebook page questioning how long the SCB has had these restrictions, noting the bank had posted the same job-ad image since November. 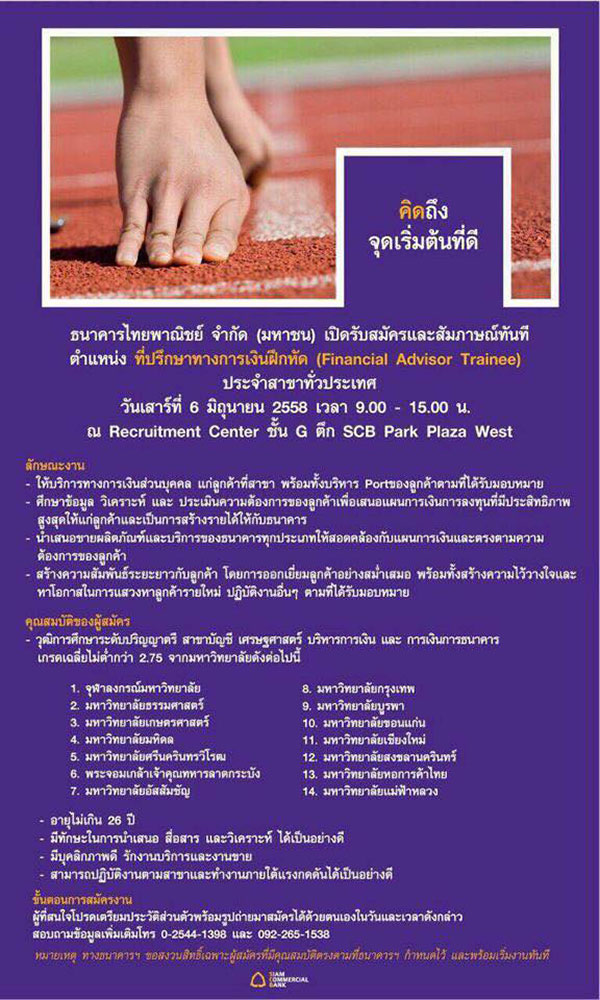