Sirikit dam down to 6.84% of usable capacity
Thailand
General

Sirikit dam down to 6.84% of usable capacity

Residents of Uttaradit have been warned to drastically limit their use of water or face restrictions as the Sirikit dam reservoir drops to just 6.84% of usable capacity, or 455.35 million cubic metres.

The low volume of usable water has forced irrigation authorities to reduce the discharge from the dam to 17 million cu/m per day, said Mr Chat. About 3 million cu/m was flowing into the dam each day.

All residents must use water economically to preserve water supplies. Although it rained a few days ago, it had not increased the flow into the dam as the rain fell on downstream areas.

Unless it rains by July 15-19, the discharge plan will have to be reviewed, Mr Chat said.

Nine districts in the province have already been declared drought-hit areas. In Ban Khok district, a total of 62,648 households faced water shortages, he said.

In Sukhothai, the severe drought is taking a toll in several areas of the northern province.

Village Moo 10 in tambon Ban Kluay of Muang district is the worst hit area, with more than 500 rai of maturing paddy turning yellow and dying as canals and ponds run dry, leaving cracked and parched fields. (continued below) 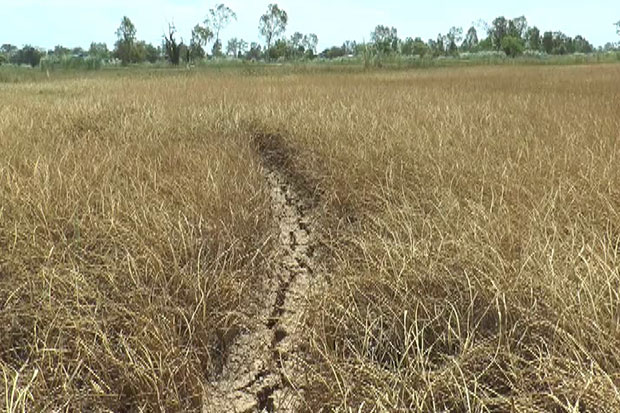 Vast areas of paddy fields lie parched and cracked, as the crops turn yellow and die in Sukhothai. (Photo by Phubes Faites)

In Chai Nat, the water level in the Chao Phraya dam increased slightly by 8cm on Thursday, but it was still below the critical point.

Dam director Ekkasit Sakthanaporn said the water behind the dam was at 13.48 metres above sea level at tambon Bang Luang in Chai Nat’s Sapphaya district. It had risen by 8cm, but was still 52cm below the critical 14 metre point.

Environmental engineers on Thursday stepped up calls for irrigation reform and demanded politicians be kept from interfering in water engineering.

Thongchai Pansawat, adviser to the Enviromental Engineering Association of Thailand, said irrigation reform was essential for efficient water resource management. Power over information dissemination must be decentralised so problems could be tackled swiftly.

Politicians must be kept away from decision-making in water engineering, he said at a seminar on how to deal with floods and droughts. The seminar was held on Thursday at the Engineering Institute of Thailand (EIT).