A woman shows jellyfish as she and other local fishermen collect this edible marine species from Trang sea to earn income during this monsoon season. (Photo by Methee Muangkaew)

Large numbers of jellyfish appearing in the sea off Trang have given a lift to inshore fishermen who earn up to 5,000 baht a day harvesting this edible marine creature for sale during the monsoon season.

Fishermen from villages in Sikao, Kantang and Hat Samran districts in Trang province have pounced on the opportunity, scooping up maeng krapun jarn, edible jellyfish of the Aurelia species, now floating in abundance on the waters.

Happy fishermen said they are even more plentiful than usual this year, and they are earning 3,000-5,000 baht a day collecting and selling them.

Traders from other provinces have flocked to Trang to buy the jellyfish from local fishermen, who sell them for 5 baht each. Jellyfish products are in high demand in Indonesia, China, Japan, South Korea and Taiwan, and this year Trang has the biggest crop. The catch is dried before being exported.

Pramot Suksawat, 51, a trader from neighbouring Ranong province, said he could buy 30,000 jellyfish a day.

The jellyfish has been late appearing this year. The harvest is usually from March to June, but their sheer numbers have made up for the delay.

Mr Pramote said he would buy all the jellyfish he could before returning to Ranong. 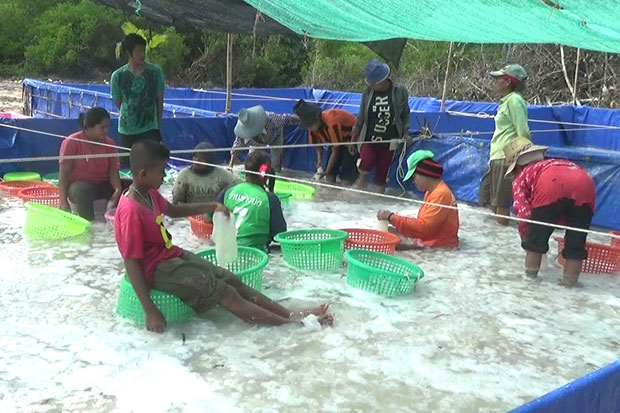 Local fishermen and their children sort the jellyfish they collected from Trang sea. (Photo by Methee Muangkaew)