Buddhist monks and novices lead local farmers in a ceremonial planting of rice in Phu Phiang district of Nan province on Wednesday, in the wake of heavy rain. (Photo by Rarinthorn Petcharoen)

Recent rain has slightly increased water reserves in the North, the Northeast and the Central Plain and rice farmers in some provinces have taken a chance and begun planting their long delayed main crop.

Ekasit Sakdeethanaporn, director of the Chao Phraya dam in Chai Nat province, said the level of the Chao Phraya River just above the dam in Sapphaya district continued to rise above its critical level of 14 metres above mean sea level for the second day on Wednesday. It rose by 15 centimetres in 24 hours to 14.21m above sea level after being below 14m for five weeks.

He attributed the increase to rainfall upstream from the dam in Kamphaeng Phet, Nakhon Sawan and Uthai Thani provinces, and farmers' cooperation with the government's request to stop pumping water to their fields for the time being to save water for general  use.

Mr Ekasit said the Chao Phraya dam increased its discharge rate to 95 cubic metres per second to supply freshwater to the Sam Lae water intake station of the Metropolitan Waterworks Authority in Pathum Thani province, to maintain the standard of tap water in Bangkok and nearby provinces. 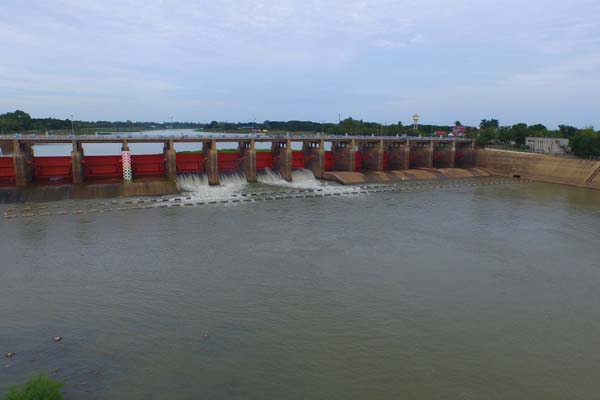 Rain also raised water levels at Nam Un and Nam Phung dams and in Nong Han lake in Sakon Nakhon province. Their water reserves amounted to 373.55 million cu/m, or 39% of their total capacity. They had been at 63% at the same time last year.

However, the rains prompted farmers to start planting rice in Nan and Nakhon Ratchasima provinces. In Nan, monks and novices ceremonially planted rice in a paddy field to boost the morale of local farmers who had long waited for rain.

In Nakhon Ratchasima, farmers said although they doubted the rain would continue, they had to take a gamble and plant their crops because they might not have another chance this year. They had already postponed planting for three weeks and local canals remained dry.

The Meteorological Department has forecast rainfall would decrease from Thursday to Saturday, but return in the North and Northeast on Sunday and Monday.