The government has agreed to protester demands to set up a joint committee to end the stalemate over the controversial Krabi coal-fired power plant project.

The agreement was reached Thursday afternoon after the protesters from Krabi, led by anti-coal activists from the Save Andaman from Coal Network, ramped up their rally by moving closer to Government House.

Protesters also asked the government to stop the project's bidding process being conducted by the Electricity Generating Authority of Thailand (Egat) and set up a committee comprising all stakeholders to develop Krabi into a 100% renewable energy province.

The network will meet representatives from Egat and the Energy Ministry today to sign an agreement on the third demand, said Mr Prasitchai.

Gen Jirasak had said the coal project probably would be suspended if the premier responded to the third demand, according to Mr Prasitchai.

Mr Prasitchai and fellow protester Akradej Chakjunda, who launched a hunger strike on July 10, said they would end it after the agreement was signed. About 100 villagers from Krabi who were also involved in the protest dispersed and headed home.

Earlier in the day, energy permanent secretary Kurujit Nakornthap said the ministry would hold public hearings again if the premier requested it, even though Egat held six public gatherings in 2013.

"If we have to do so, we would set up [another hearing] in Krabi with unbiased academics present," said Mr Kurujit.

According to Mr Kurujit, the 59-billion-baht Krabi power plant and deep seaport would harness steam energy, which is more efficient and emits less carbon dioxide than the old model. The development cost will exceed the initial estimate of 10 billion baht, because the method is cleaner, as the locals have requested, he said. 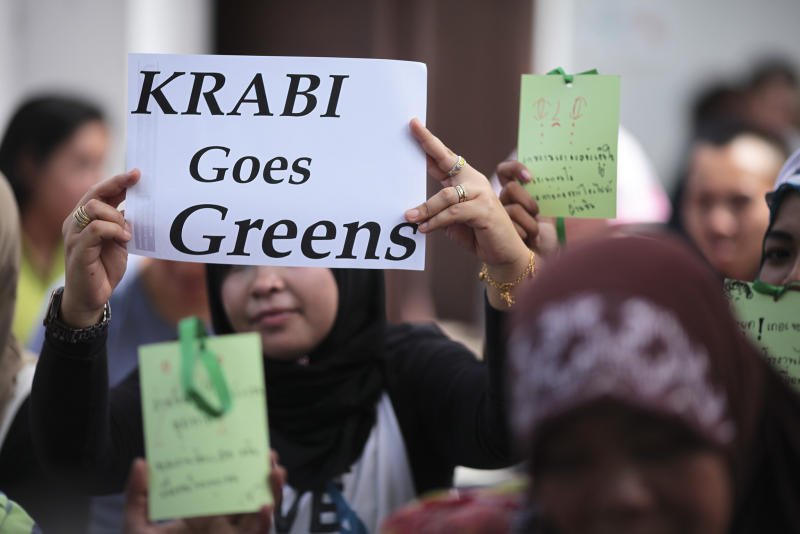 The protest which began on July 10 when two activists began a hunger strike attracted hundreds of supporters, including this woman and at least 100 Krabi residents who travelled to Bangkok to demand a halt to plans for a coal-fired power plant. (Photo by Patipat Janthong)

Power supply in the South is now nearing a critical point, with demand exceeding supply and a disruption in the natural gas supply, he added.

Brownouts, or partial  blackouts, and total blackouts will start occurring frequently in the next several years, which will hurt the tourism industry, he said.

For example, in 2012, a blackout on Samui island for two days between Dec 4-5 caused more than 20,000 tourists to cancel their bookings and leave the island.

Countries with high environmental standards, such as Denmark, Germany, Japan and South Korea, use coal as a mainstream power supply, said Mr Kujurit.

Parliament has voted for a party-list MP calculation method, which observers say could give small political parties a better chance to have their list MPs in the House.