US keeps Thailand at Tier 3

The United States has kept Thailand on the bottom Tier 3 in its new report on human trafficking.

"The Government of Thailand does not fully comply with the minimum standards for the elimination of trafficking, and is not making significant efforts to do so," the report said

"Some Thai officials are complicit in trafficking crimes and corruption continues to undermine anti-trafficking efforts."

On Monday afternoon, hours before the US report was released, Prime Minister Prayut Chan-o-cha said he would respect the US decision. He agreed there are still many steps to take against human trafficking in Thailand, but said he felt that in recent months there had been "substantial progress".

The Foreign Ministry issued a statement shortly after the TIP report was released, saying that maintaining Thailand at Tier 3 level "does not accurately reflect the significant efforts undertaken by the government to tackle the problem".

Echoing the prime minister, however, the foreign ministry promised, "Thailand will continue to do its utmost to overcome the remaining challenges while also promoting security and upholding our long and distinguished tradition of adherence to humanitarianism."

Deputy government spokesman Weerachon Sukhontapatipak insisted state agencies have done their best to tackle trafficking, but he admitted that more needs to be done.

Malaysia, as predicted, was elevated out of Tier 3 to the Tier 2 watch list.

Media reports and congressional sources in the US capital said it was necessary to promote Malaysia because President Barack Obama needs Kuala Lumpur's vote for his Trans-Pacific Partnership treaty.

Final negotiations on the TPP are to start this week. Under US law, a country at Tier 3 of the human trafficking rating cannot participate in trade deals with Washington.

In another case, Cuba was also elevated from Tier 3 to the Tier 2 watch list. The US just re-established diplomatic relations with Cuba after some 50 years.

There also has been resentment of the deadline for contributions to the report. A cutoff date of March 31 meant that almost no achievements of the Prayut government could be included in this year's TIP report.

The March 31 deadline for submission of all information for the TIP report meant that the major steps taken by Gen Prayut's government were not officially considered.

That included the discovery of transit camps and dozens of bodies of human trafficking victims and the indictment of more than 100 suspected traffickers including a three-star army general. The international meeting in May to deal with the Rohingya boat people also was too late to make this year's report.

The US Embassy in Bangkok issued a separate statement on Monday night that recognised positive steps since April 1, and said they would be covered in next year's report.

The US report contains several updated sections from the 2014 document, which dumped Thailand into the bottom tier. But it concluded that "corruption and official complicity in trafficking crimes continued to impede anti-trafficking efforts" and noted that no prominent cases have yet gone to court. 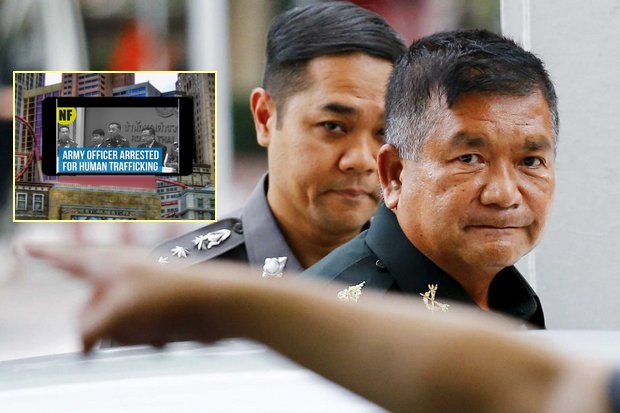 In June, Lt Gen Manas Kongpan became the face of the trafficking gangs and the campaign against them when the government arrested him and charged him despite his status as an "adviser" if the Internal Security Operations Command (Isoc) in the South. (AFP photo)

There seemed to be a general consensus that Thailand would remain at Tier 3, the lowest possible rating.

Academic Panitan Wattanayagorn of Chulalongkorn University’s political science faculty, said the Prayut government had made progress in dealing with human trafficking in line with recommendations from the US side, such as intensifying law enforcement that led to the arrests and indictments of human trafficking rings, including high-ranking officers.

Mr Panitan, who is also an adviser to Deputy Prime Minister and Defence Minister Gen Prawit Wongsuwon, said if Thailand remained at Tier 3 when the report was issued, it would show there are some weak points in the system that needed to be improved, concerning victims screening process and legal proceedings in particular.

However, he said the credibility of the report could be brought into doubt if the report’s findings are exploited as diplomatic and political tools to pressure countries, or used to pursue bargaining on trade issues.

Mr Panitan noted, however, that although the TIP report contains no punishment such as sanctions, some economic effect would be unavoidable for a country placed in the lowest rank.

"If we are still at Tier 3, it means our attempt has yet to meet their expectations and we need to work harder. But the worst scenario is political and diplomatic pressure," Mr Panitan added.

As in the past, the TIP report began its 4,060-word section on Thailand by noting the country "is a source, destination and transit country for men, women and children subjected to forced labour and sex trafficking". 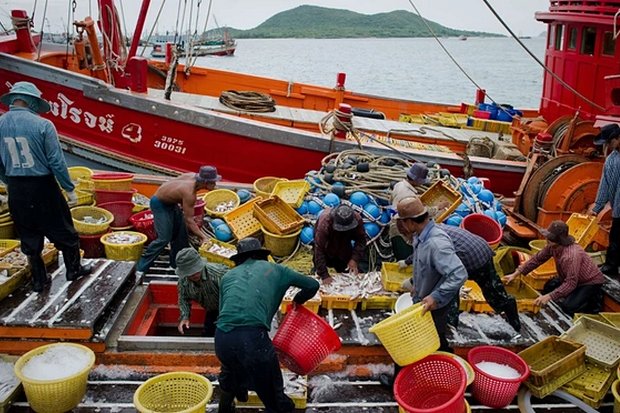 As in previous years, the fishing industry came in for lengthy and scathing criticism in the US report, although it did not use the word "slave" as it did in the past. (AFP photo)

It did not use the word "slave", but it mentioned "corrupt" and "corruption" 11 times, stating it was the main reason for the existence of trafficking and for difficulties in combatting it.

Foreign experts on the issue were not surprised by the decision to keep Thailand at Tier 3.

Thailand's trafficking problem is systematic and deep-rooted," said Andy Hall, a British campaigner for migrants' rights. "Though there have been some positive signs, it's still too early to see positive results."

"Thailand should recognise that verbal commitments - however welcome - need to be backed by real action on the ground", he said. Mr Robertson said official impunity has enabled traffickers to act without interference for years.

"That's the message of this (US TIP) report", he said, "that talk is not enough any more. The US and the international community will be watching closely ... and only real progress will receive the accolades that Thai policy-makers want".

Jumpol Sanguansin, director-general of the Fisheries Department, said authorities have been checking for forced labour on fishing trawlers through the Port-in, Port-out control centres.

The centres are part of the government’s efforts to combat the illegal, unreported and unregulated (IUU) fishing.

He said the centres have played an important role in examining work permits for fishing crew on trawlers and they also stop people under the age of 18 from being exploited as labourers on the boats.

These are key factors that show the government is trying to clamp down on human trafficking, he said.

Abhisit Techanitisawat, chairman of the Thai Overseas Fisheries Association, said he was confident Thailand would be upgraded to Tier 2 in the TIP report, because of the government’s increased efforts to fight trafficking, especially in the fishing industry.

Sakkarin Niyomsilpa, a demographic expert at Mahidol University’s Institute for Population and Social Research, expressed his concern about the ranking because the US concluded the document in March before the government stepped up its anti-trafficking campaign.

Whether the US took into consideration the government’s most recent efforts remains to be seen, he said.

The government must continue to pay attention to halting human trafficking as it is a human rights concern. It should not try to satisfy the demands of particular countries but tackle the problem for its own sake.

The US report can be read online or downloaded in PDF format from the US State Department's human trafficking section.