Healthy again, Phang Littiruachai is taken back to the forest in Hua Hin on Wednesday. (Photo by Chaiwat Satyaem)

PRACHUAP KHIRI KHAN — A female wild elephant found sick in Hua Hin forest two months ago was released back into its natural habitat on Wednesday after treatment restored it to full health.

A ceremony was held at a reservoir in the Littiruachai special warfare training camp in Hua Hin district to release Phang Littiruachai, who is aged about seven or eight, into Kaeng Krachan Forest Complex after 46 days of treatment. 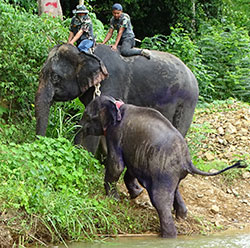 Phang Littiruachai goes back to the forest (Photo by Chaiwat Satyaem)

Phang Littiruachai was the first elephant to undergo treatment in the forest by veterinarians from the Department of National Parks, Wildlife and Plant Conservation.

The elephant was found lying near the reservoir by border patrol police on June 21 and was named after the camp — Littiruachai.

The medical team supervised the pachyderm closely around the clock until it became well and could eat normally.

Phang Littiruachai was chaperoned across a creek to the jungle by mahouts on two older elephants from Hua Hin elephant village before being unroped and released, amid cheering from park officials and local and foreign animal rights activists. The ceremony was presided over by department director-general Nipon Chotiban.

A radio transmitter was attached to the jumbo’s neck so that park officials could check the walking routes of wild elephant herds in the area. The GPS radio-collar has a 10-km transmission radius and seven-year life.

Kuwait suspends flights to and from Thailand over coronavirus fears

CAIRO: Kuwait's civil aviation authority announced on Monday it had suspended all its flights to and from Thailand, South Korea and Italy after reports of an outbreak of coronavirus in the countries, state news agency KUNA reported, saying this came in accordance with the Kuwaiti Health Ministry instructions.

The SET index suffered the biggest drop among Asian bourses on Monday as confidence was hampered by rising cases of the Covid-19 outbreak outside of China.